My name is Frank and I am a 25 year old who very much enjoys Halloween. Every year I go all out with all my costumes. This year I had a Darkwing Duck Halloween Costume Idea. I started the costume by ordering a children’s plastic duck mask. I then cut the top half of the mask so that my actual eyes would be attached to the beak itself and glued feathers around the cheeks. Last year I was Roger Rabbit and wasn’t able to drink because the mask I had on did not allow access to my mouth. This year I did not want to deal with the hassle of taking the mask off so I cut the beak in half and crazy glued the bottom to my actual jaw so that I would be able to speak and drink.

As for the rest of the outfit, the cape and scarf were made with fabric I bought in downtown. The jacket was purchased at a thrift store but I had to cut off the buttons and apply gold ones so that jacket would look double breasted like the character’s version. My feathered bottom area was actually a feathered shirt I had to make the previous year for the Roger costume; all I did was cut off the arms and wore the shirt as a diaper pretty much.

My feet were actual flippers that I spray painted orange and the gun was purchased at Walgreens and came together with purple spray paint, liquid nail glue and a plunger. Hope you enjoy my costume and Happy Halloween. 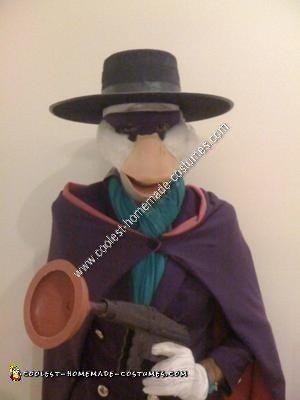 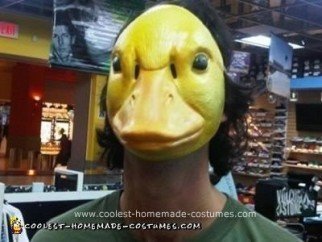 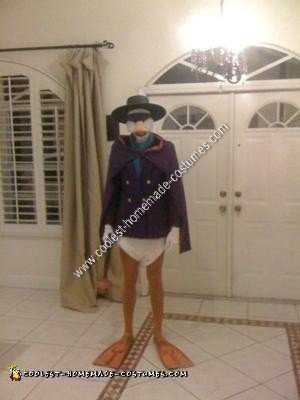