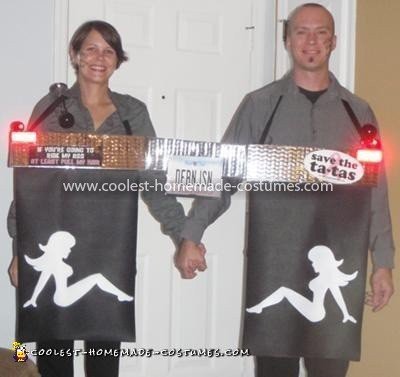 After looking for inspiration for an inexpensive homemade costume, I stumbled across this site. We were looking for a couples costume that would allow us to be original but easily move through a party or bar and be able to dance without it being too cumbersome. I saw on this site a couples ‘mudflap’ where the man was the flap and the woman’s body was painted silver to be the silhouette on the flap. That gave way to the fact that there are two mudflaps on a truck and we went from there.

First we measured shoulder width for each of us and bought a piece of vinyl at the fabric store. ($5). Next we printed an enlarged picture of the ‘trucker girl’ silhouette (you could use the Yosemite Sam ‘back off’ picture too) and made a stencil using a piece of poster board. We bought some white spray paint and painted the picture on the flap (poster board and paint $3).

Next we already had some packing foam where we made the bumper and covered it in chrome tape from an auto store ($10 for two packs). We added $2 self sticking bike reflectors to the bumper and a strap to wear it around our necks. This was the basic flap. We then came up with the original ideas for the costume: bumper stickers, a license plate to connect us as a couple and then something to ‘honk’ at!

We had a lot of people ‘honking’ our horns throughout the night. This was an easy and relatively inexpensive costume and could be customized to your style. Total cost before horns: $20. The horns were a last minute idea and picked up at a party store so they were overpriced ($7 each) but totally made the costume a hit all night!! Thank you for the inspiration for our super fun 2011 Couples Mud Flap Costume!! 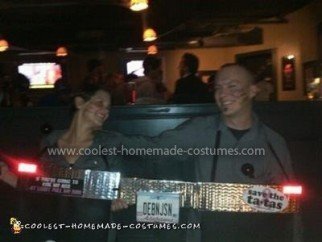 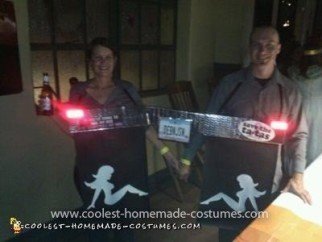