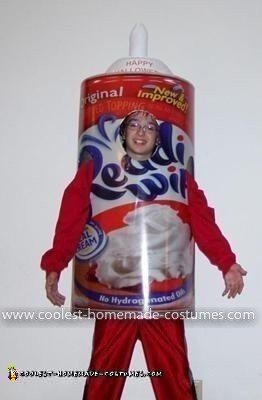 My name is Victor. I’m 12 years old and I love Halloween, and not just for the candy! I’m known in my neighborhood as the kid with the best costumes. I have been a giant pickle, a bottle of ketchup, and many others. This year I am going to be a bottle of Cool Whip, (Reddi Wip is the official name). So, to make this Homemade Cool Whip Costume, I bought a can of Cool Whip, took it home and took a bunch of pictures of it from all the sides. The next day, I went with my dad to his job, and there they have a poster printer. So with the help of my dad and his assistant, we cropped it, and printed out a giant Cool Whip label!

I went to the Hardware store and bought some formica, which is like the stuff on the top of the counter tops, its really light, bendable, and also heavy duty. So after making it into a cylinder shape, we soaked it with spray glue and carefully put the label on it. We then cut a circle out of cardboard and covered the top. We now had a can shape. Next we found some thick pully ropes in the garage and put them on the inside as shoulder straps to hold the can up when I wore it. After that, we got an old plastic salad bowl from the kitchen and spray painted it white, turned it upside-down, and glued it to the top of the can (for the base part of the nozzle). Then we bought a 1-quart bottle of milk, drank it, and cut four slots on the top, for a perfect cool whip nozzle. I took it to school and won the best costume award!

Thank you for taking the time to read this, I hope you can consider me for the winners circle!