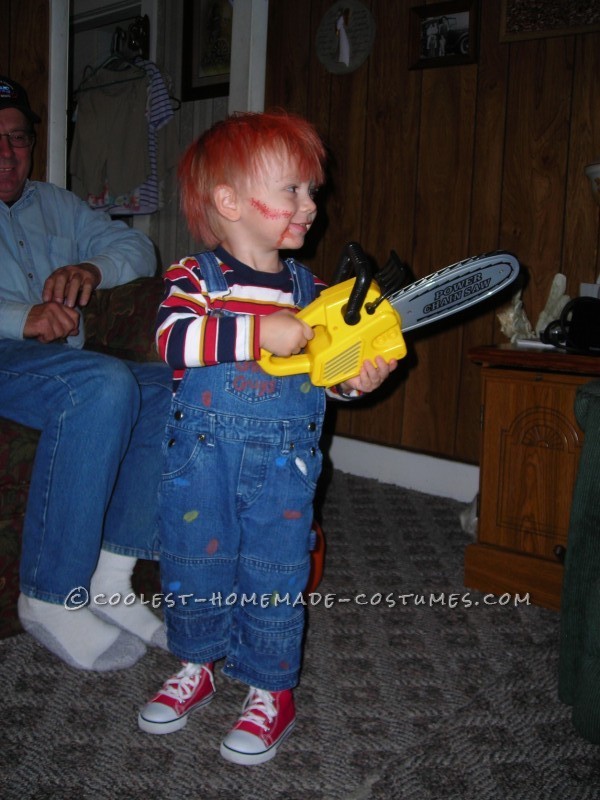 Okay, okay, before you say anything, I know there may be some people who feel it is not appropriate for a toddler to dress up as Chucky. BUT I assure you my son had not watched the movie! He was not even two at the time, and didn’t appreciate the irony of the costume. He did get a kick out of everyone’s reaction though!

For the costume, we mostly used items we already had at the house. My son’s old jean overalls, his striped shirt. We also found some adorable red sneakers at Walmart on clearance… which were actually the inspiration for the costume!

To really transform my sweet, adorable baby into a nightmarish killer, I first used poster paint to “splatter” his overalls. I also painted the famous “Good Guys” logo on the front center pocket. Obviously, a one year old would not keep a wig on and in place, so I used good old fashioned teasing and hairspray straight from the 80’s and made his hair stick up as much as possible. I finished his hair with washable red spray from Walmart. I continued the theme with tattoo scars I also got at Walmart. These were almost too realistic looking! LOL.

I didn’t want my little boy getting the impression that knives were okay to play with, so I decided to forgo the plastic toy knife and let him chase people around with his toy chainsaw, which, again, we already had at the house. He was very pleased with this.

When all was said and done, we were pretty pleased with the results. While I am sure there could have been improvements made, the fact that his costume looked SO homemade was part of the treat. We couldn’t walk down the street without someone pointing and making the “OMG” face. Mostly everyone laughed. While he didn’t know why, he definitely enjoyed the attention.

I apologize that the picture isn’t better, but he was so happy running around chasing people with chainsaws that he wouldn’t exactly sit still to pose!