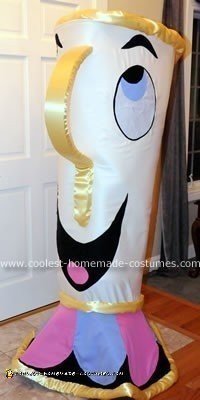 My children attend a school where they are given a theme for the costume dances.

This year’s theme was ‘Disneyland’. I have four children so they each thought of which character they’d like to be.

My sophomore son decided he wanted to be Chip from Beauty and the Beast!

* I started looking for ideas on the web looking at ‘images’ to see what the actual drawing looked like and then to see how others might have created a costume for the theater. (Which is where I found your site.)

* I found a thin foam and wrapped it around my son in a cone shape to create the teacup as well as the foot of the cup. I measured around his middle to make sure the center opening was big enough for him to slide through. Once I made the pattern for the cup I cut two layers of the foam and layered them with boning running vertical every 6 inches or so and then an other layer of foam using foam glue to bone these layers together.

* I made a pattern for his face (each piece, white of eye, color of eye, eyebrow, tongue, mouth…) moving them around and changing their shapes to get it to look the most like the cartoon as possible.

* I purchased fabric to cover the foam matching Disney’s colors as inexpensively as possible. I used dull satin for the main part of the teacup and a shiny satin for the handle/nose and rims. The other pieces where just scraps I already had.

* The yellow rim, middle and base are tubes stuffed with polyfill.

* I used two rows of boning to give the upper rim some stiffness. I thought that wire would be too harsh while dancing.

* Gannon really enjoyed being ‘Chip’ but dancing was tough and said that he did not get to do much more than spin when he was in the mosh pit.

My only question is where am I going to store it?

15 thoughts on “Coolest Chip from Beauty and the Beast Costume”