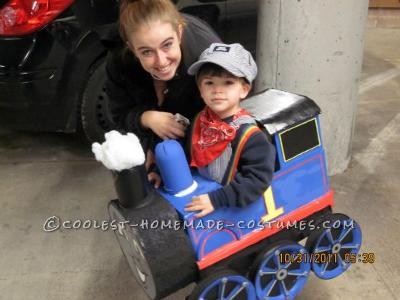 I made this child train costume out of stuff I had around the house.

I started out with a box for the body and painted it. The face of the train I used a piece of Styrofoam that came out of a fan I had purchased, shaped it round and painted it black. I painted the face from a coloring book I had and blew up. The smoke stack came from an oatmeal container. I actually cut a small hole in my pillow and pulled some of the stuffing out for the smoke.

The wheels were two Styrofoam plates glued back to back and painted. The spokes are straws and I used regular house hold caulk to make the bolts than painted them. To make the wheels stronger I glued a paint stir stick to the back of the wheel to attach to the body. The train had working lights and a train sound. I took a sound module out of one of my grandson’s toys so he just pushed a button for the sound.

For the lights I purchased some blinking Halloween lights that were battery operated, and were push button. It was not hard at all but did take time for caulk and paint to dry.