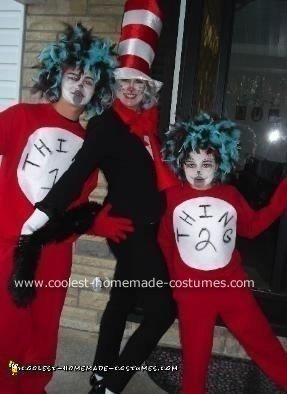 We had a blast preparing the Cat in the Hat with Things 1 & Thing 2 costume. First we started with the “THINGS”. We purchased plain red sweat pants and sweat shirts from Walmart. We also found red gloves and fuzzy red slippers there too. I bought some white felt and some iron-on backing.

We brought our goods home and cut two large circles out of the white felt, warmed up the iron and ironed on our white felt circles on to the red sweatshirts. After it was completely cooled, I took a fabric marker (black) and wrote THING 1 AND THING 2 on each. Now for the blue hair, couldn’t find what I had in mind, so I bought two cheap hats and tacked a boa around it for the feathery hair effect. Loved it, they turned out great! I liked the mixture of blue and black. I painted their faces white and added black accents here and there.

For the cat (me). The only thing I purchased was the hat and then I made my bow out of red felt and I slipped the bow through a wire necklace so I didn’t have to pin it on me. For my cat costume I used a nice black trimmed in suit jacket that I already own, a white tank top, and black pair of leggings, white socks and black shoes and wore white gloves. I used the black fur collar of one of my winter coats for my tail. (pinned it on). I painted my face white and used black accents for whiskers and a little pink nose. I have long hair, so I tied it up on both sides and sprayed some white on it to give it a more furry look.

We wore this to school and everyone was taking pictures. Great time!