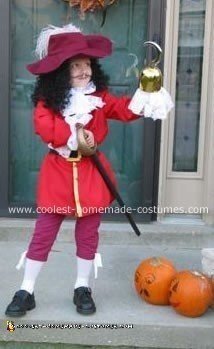 This is my son’s Captain Hook costume from last year. If you could not tell it is Captian Hook from Peter Pan. Every year we try to come up with a theme, that year it was Peter Pan.

I found some pictures on site of Captain Hook for reference in colors and such. I think took various patterns from other costumes to create the jacket. I used three different patterns to create the one jacket. The pants were the easiest part and I simply used one of my son’s pajama pants for a pattern.

The belt was simple. I took a piece of black elastic and sewed a small patch of fabric to the front and some Velcro to the back. I then used fusible interfacing to put on some gold metallic trim as a belt buckle.

The hat was a little difficult. I made a pattern using a bowl that fit his head well. I used wire in the brim so that I could shape the hat’s brim in the way that I wanted. Then I found a head scarf that had hair attached for a pirate. I pulled the headband out and hand stitched the hair in to the hat. So it acted like a one piece item.

Overall I think it came out better than I had hoped it would. The sword, tights and shoes were bought (the shoes he already had as dress shoes). I also made a bag for him with the croc on it. I took a coloring book pattern I found online and printed it on contact paper I then transferred that to two sided interfacing. I cut out each piece individually and ironed on to felt. That allowed me to cut out the felt and piece it back together on the bag after sewing. I then added some fabric puffy paint for the eyes so that when he carried it the croc looked up at him.

Hope you enjoy the picture and can use some of my techniques in your own costumes.