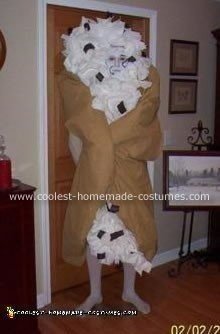 I was going to a costume party for an Italian Club in my area. The original Italian tradition evidently was a festival in the town with the poor peasants in the town dressing up like the rich and visa versa. The party I attended took some liberties with that concept and therefore the basic requirement was any Italian themed costume.

I got the idea for my costume by researching Italian costumes on the Internet and I stumbled across this very site. I went under the food category to get some ideas for Italian food themes and saw a picture of a child in an ice cream cone outfit. That led me to the idea of a similar food related shell that had an Italian tradition, the cannoli.

I have no pictures of the outfit as it was made because it literally was transformed to the final product just hours before the event began. Although it took considerable time to make the outfit, not knowing exactly how we were going to do it, to recreate it would take only a couple of hours.

I started with a standard carpet pad that is used under an area rug. The pad is the same color as a cannoli shell and the semi-smooth texture was ideal as well, so no paint was needed. I folded the carpet pad in on itself so that the square shape was more like an oval to start with. I pinned it together in that shape, and then just wrapped it around my body. Picture how you roll up something in a tortilla shell. For a smaller person you may have to cut the pad, but folding it made the material thicker which looked better anyway with the added advantage of still being able to use it as a carpet pad again. I pinned it at the front with big safety pins.

The “cream filling” was simply paper towels fluffed up and scotch-taped to the shirt I had on underneath and also taped to the edges of the pad and the balloons themselves in the back. I cut strips of construction paper and curled them and then taped them to the paper towels to make the “chocolate” shavings.

I imagine it could be done differently but I had the pad on me first and then had someone pin it together around me and then add the paper towels. It would have been difficult to make it ahead of time and then put it on myself without changing the way it was made. It did make it through the whole party and believe it or not I drove to the event like that.