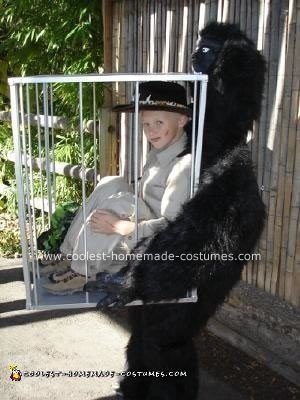 This Caged Safari Boy Halloween costume is a caged safari boy from the jungle. It shows how a capture of a gorilla went terribly wrong. Many people thought that this was two people!

I bought the gorilla suit and cut a slit for his waist to go through and then stuffed the upper body of the gorilla with newspaper. We had to make a frame to attach to his back in order to support the top of the gorilla and carry the costume. Straps were attached to the frame and went over his shoulders and down to his waist where they were fed through a belt to hold secure. The gorilla’s eyes were made from white model magic and then painted. We used a red pen to give the appearance of “bloodshot” eyes.

The cage was made out of odds and ends such as a Styrofoam sheet, wooden dowels, plastic rods for the corners, lightweight aluminum strips to hold Styrofoam in place and to attach the dowels to. I found all of these things walking through a local home improvement store. Once the cage was made, I spray painted it silver.

I made the safari outfit out of a basic boy’s pant/shirt pattern and inexpensive material. The safari hat was purchased at a costume shop. The fake legs were then stuffed and attached to a pair of old shoes. The gorilla’s hands were then attached to the sides of the cage using velcro to give the look as if he was actually carrying it.

To complete the look, we added fake cuts and scratches to my son’s hands and face to look as if he had put up a good struggle before finally being captured! It proved to be another big hit on Halloween. I myself couldn’t believe how real it looked! This costume did take lots of trial and error and many “fittings” (which my son didn’t like), but in the end, it was a huge success.