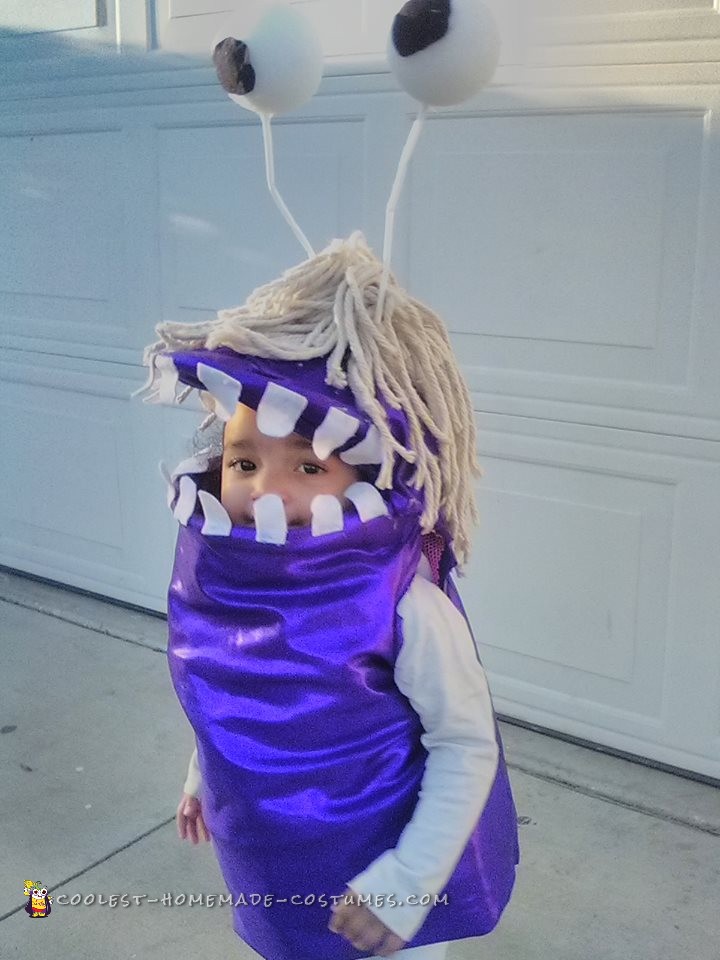 Ive always wanted my kids to be Monsters Inc. characters, but never really made them. This year I decided to go ahead a give it a try. I started off with an old jacket that my 2 year old had outgrown. I was about to throw it away then thought it would be perfect for this costume as the puffy part (the stomach area).

I then hot glued on some purple shiny fabric I got at salvation army for only $2.00! It used to be an extra large jacket for a man lol.  I bent 2 wire hangers into a circle, and then I placed the wire hangers in the hood of the jacket to hold the mouth part open. Then I added 2 Styrofoam balls (I bought also from the dollar store) as eyes and drew on the black pupils with a marker and put them on a straw that I had placed leftover wire inside of.

I bought a simple mop from the dollar store, broke it and put the top part of the mop on the hood as the hair. I bought some white felt for the teeth and cut them out as teeth shaped as I could, then hot glued them onto the hood.

It took me about 4 hours to make it and it wasn’t too hard either! Everywhere we went in it so far is a hit! Everyone loved it. The costume contest lady was interviewing my 4 year old daughter Ari – it was the funniest thing! We entered into the contest and she ended up winning first place. Everyone was asking where we bought it from and if they could also get one from me.

I was able to get a few people to place custom costume orders from me just from seeing my daughter walk around in this.