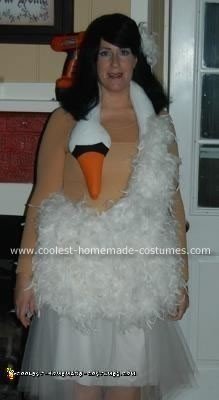 I decided that this year I wanted to make the infamous Bjork Swan dress Halloween costume. I began about a month before Halloween. I bought 6 feather boas on eBay. I bought a tulle slip that was to my knees off of eBay. I then bought a yard and half of white felt from Jo-Ann Fabrics. I bought black and orange felt from Wal-Mart in the craft department. I then bought pillow stuffing.

I started by hand sewing 5 feather boas around the tulle slip. This took some time to do so plan for that. It was also a terribly messy project. Once I finished I started the swan head and neck part. I drew out the shape of the head and neck, then I laid my pattern on the felt that was doubled and I cut it out. So I ended up with two swan heads and necks. I then sewed them together and stuffed the whole thing. I left the stuffing out of the part that was going to lay on the back of my neck so that it would lay flat on my neck. It was hidden behind my wig. I pinned the widest part of the neck onto the tulle skirt from the inside so the pins were hidden. This way I could easily take it on and off. Then I took the last boa that I had and sewed it up the neck of the swan. I also hot glued some of that part to get the fly aways. Finally I bought a nude body suite and wore a tan tank top under that. I bought the wig at Jo-Ann’s too.

I got a lot of compliments and everyone appreciated all the hard work that went into the costume.