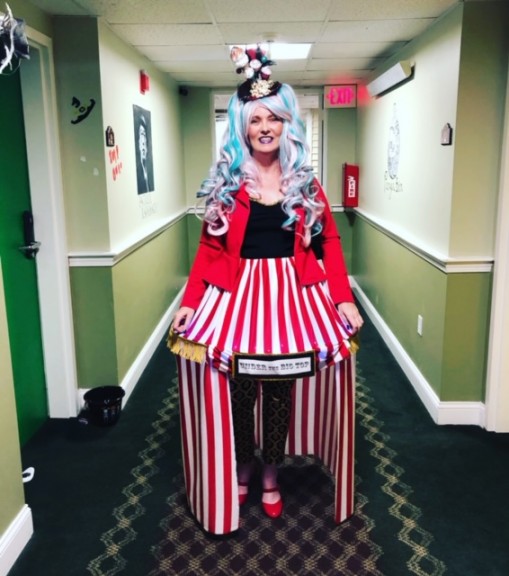 I love any chance to create a costume. My kids have long since outgrown letting me make theirs so now I create my own to wear to a Halloween fundraiser.

This year I wanted a circus theme and was initially stumped until I decided to go with the Big Top. The costume is a combination of items I had on hand (red shoes, black and gold pants), items purchased from Amazon (wig and ring leader jacket), items that needed to be altered or embellished (Halloween top hat headband that I removed the skeletons from and added faux popcorn, cupcakes and ice cream cones to along with adding gold trim to a Walmart tank top).

The big top itself which I had no pattern for was a bit of a labor of love. It was essentially a hoop skirt that was rather easy to wear. I purchased a wire wreath form at a craft store and striped fabric. To attach the fabric to the wire wreath I folded the fabric in half lengthwise with the ‘right’ sides facing each (basically the fabric was inside out at this point and began sewing around the entire perimeter of the wreath).

When completed I unfolded the fabric and the bottom portion of the skirt became the tent walls and the top of the skirt would become the big top. The top still needed to be stitched up vertically to close up the skirt and then have an elastic installed so that I could actually wear the Big Top. In order to do this I pretty much eyeballed it in a mirror to determine the appropriate length. Some finishing touches were a set of battery operated lights that would blink in sync to any music that was being played. These were wired to the wreath form.

I also sprayed cotton candy scented body spray on the wig as a final detail. This took 1 week of very late nights but was well worth it as I won a trip to Las Vegas for this costume. 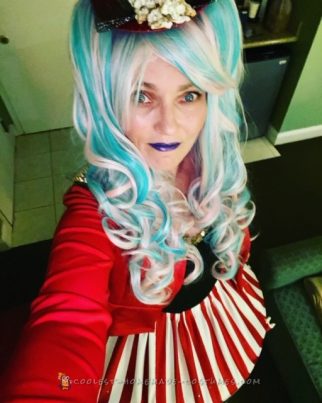