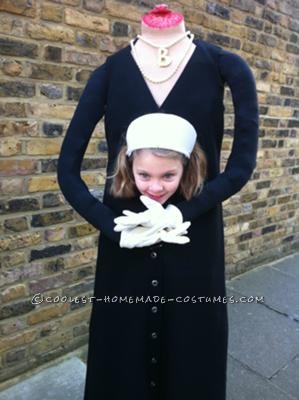 Every year our school has a Book Day and the children come dressed as their favorite book character. As they have been learning about the Tudors and my daughter is a big fan of the Terry Deary Horrid Histories books, she wanted to go as Henry VIII’s second wife, Anne Boleyn. I decided it just had to be after she met her unfortunate end!

Initially we were going to cover her head and she was going to carry a toy make-up/hair styling head under her arm. But after seeing some of the costumes on your site we were inspired!
I made the body out of a heavy card carton that we got a flat packed chair in. I wrapped it round, cut out  “slots” so that it sits on her shoulders but left it extended down her front and back to keep it braced upright. There is a hole cut out for her head to come through. I used a coat hanger to shape the shoulders and the neck is from the plastic carton that a computer mouse came in, just the right shape.

The arms and hands are foam filled black tights with a wire coat hanger through the middle so that they can be bent into shape. The wire is taped onto the hanger at the top. The flesh is made from stockingette covered with old tights, glued into place with PVA. The severed neck is colored with red paint, we couldn’t make it too gory in case we frightened the younger children!

We were lucky to find some gloves and a 70’s full length black evening waistcoat in our wonderful local charity shop, the buttons down the front of the dress made the whole thing so much simpler. All finished off with some cheap pearl beads, a gold foil  “B ” pendant and a white card headdress stuck onto a hairband.

She won the class prize for the best costume and got so many compliments. And on the way home people were crossing the street to ask if they could take her picture. I haven’t had so much fun in ages and can’t wait until Halloween when I’m going to wear it! Thanks for the inspiration.