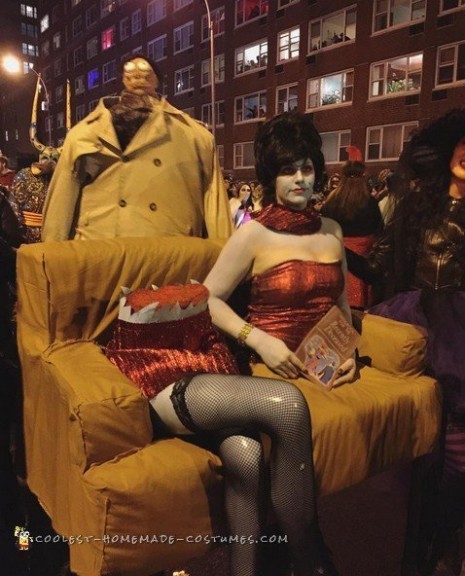 I love Halloween.  I love making my own costumes, because it allows me to be something out of the ordinary. And I love going to New York City for the Village Halloween parade to not only show off my creation, but also to admire other people’s efforts.

I had the idea of going as the magician’s assistant from the waiting room in Beetlejuice a while ago. I went as the receptionist (Miss Argentina) from the same movie in the past, and I had a really good reaction from people. This was my first big costume, so I was terrified that I wasn’t going to pull it off.

I started off with a PVC pipe construction for the frame of the sofa. I ordered special connectors online to attach rolling caster wheels. Sort of like a huge, weird walker. So, once I had the rolling frame, I cut and taped together cardboard in the shape of a sofa and that went over the frame. To make it look softer and more like cushions, I sprayed adhesive and attached batting in a thin sheet over the cardboard. I covered the whole thing in fabric sort of like a sofa slip cover over top of that. A slip cover with the worst hand stitching you’ve ever seen. In one end, I cut a hole where I could pop up through the bottom and reveal only my upper half.

To tackle the legs, I had some trial and error. I first tried to make a mold of my own legs, using tights and duct tape. That came out awful! The duct tape wrinkled up and looked more like a mummy. I found two pretty cheap leg forms from eBay and ordered those to the house. They only came up to the mid thigh and I couldn’t quite figure out how to get them to cross over, and also what to make the torso out of. Or, how to attach everything together. I cut into them and basically destroyed them trying to figure it out. With a little over a week to spare, I raced over to a local mannequin supply warehouse. For a cool $60, I found myself a pair of crossed legs complete with a torso. All I had to do was spray paint them blue, attach some of the extra batting painted red to the top for the “cut”, wire it down to the cardboard and frame. My boyfriend ordered the signature “Handbook for the Recently Deceased” from the movie off Etsy.

I found a really great fabric, again, from eBay for the outfit. I managed to operate my mom’s sewing machine enough to sew together the skirt. My top was a different story. Knowing I couldn’t create a shirt out of thin air, I decided to use some body shaping under garments as a “base”.  The only thing is, when you take a stretchy garment and put non-stretchy fabric over top of it, it usually results in a huge rip. And it did, as I told my boyfriend to just cram the top over me like a sausage casing as I assumed the diver position. I was able to fix it a little with some safety pins, and no one else really seemed to notice but me. Besides, the wig I bought online was on point and the makeup I did was bright and eye catching to distract from all that.

Mike, my boyfriend had molded together the shrunken head for the small headed man also in the waiting room. We found a long, khaki jacket at target and stuffed the arms. Using wire and more clay, he attached the small head to an old baseball hat. We used foam to make fake shoulders. He bought a hat at a party store and dewed it to the fake hands (in gloves).

With all the elements in place, it was time to “go live”. I had dragged the costume out into my street to do some test rolls and all seemed okay. Only, I forgot that New York city is riddled with cobblestones, giant cracks and whenever there is a group of people, garbage dotted like land mines. We had an 8 block walk to the start of the parade route. The rumbling of the street caused the nuts to loosed on the caster wheels. Every 2 blocks, a new wheel would fall off and go rolling into the street. Thanks to the quick thinking of my friend, we were able to put paper around the threads and basically jam them into place.

I couldn’t stay still for anywhere for more than 5 minutes without drawing a crowd of flashing cameras! Mothers would throw their kids in front of me and snap a photo. The people who recognized my character gave me a lot of praise, and those who didn’t merely exclaimed “how cool!”. Walking in the parade was tough, every crack in the street would stop the wheels and the whole thing would tilt forward a bit.  Luckily, it weighs nearly nothing so I was able to pick it up and keep rolling. My friends helped a great bit, walking behind me and pushing me. My second favorite part was catching the eye of some man on the sides of the parade, he saw me and just dropped his mouth open. He just kept blinking and sort of shaking his head back and forth trying to take it all in. I was almost past him, before he realized he had a camera and brought it to his face to snap a picture.

My good friend Rosie suggest I take a photo with my boyfriend, which was a great idea because I had been feeling disconnected (pun intended!) from everyone the whole parade. I couldn’t turn around and make conversation, I was stuck forward. He leaned in on the side, then turned toward me and got down on one knee in front of the whole parade! Everyone cheered and I reached out to give him a hug. Always a professional, complained about my make up running and that’s the story of my “better half” costume! 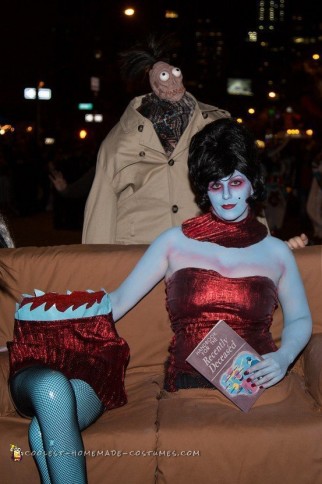 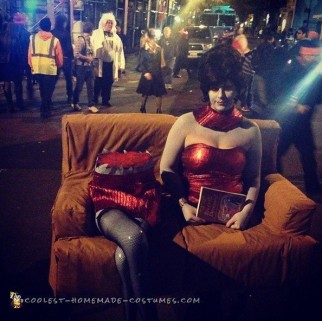 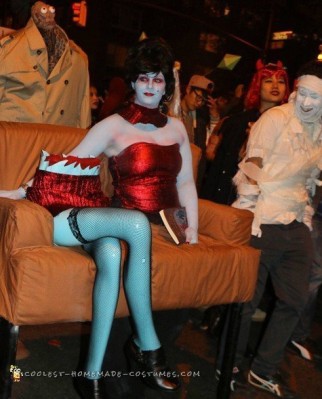 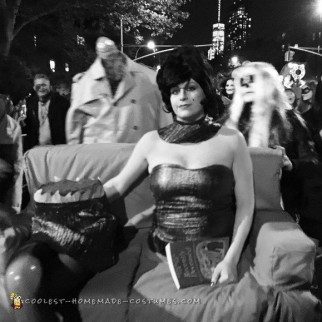 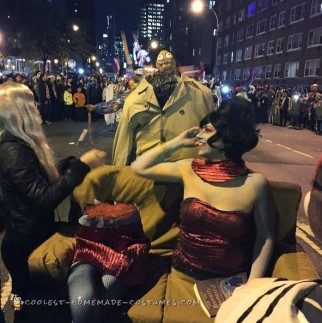