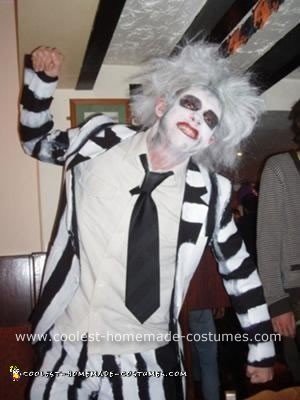 My brother asked me to make him a Beetlejuice costume for a Halloween party he was going to, he asked me the day before so I did not have much time.

I took a black suit that he already owned and painted the white stripes down it. I copied a photo from the film off the internet – this took me ages and it took a long time to dry, in fact it was still wet when my Brother put it on.

I got a granny wig that was platted as it was the only one that I could find that would work. I took out the plaits and cut it to make it resemble the real hair of beetlejuice, I then sprayed it with white hair spray and also added green and black face paint to it.

For the face I used white face paint and covered the whole face, I then used black around the eyes and red lipstick. I also used black and green around the top of the head and down the side of the face and on the neck.

My brother wore a cream shirt and black tie to complete the look.

He won the competition at the party. Total time taken was a whole day and it cost about $20 as all I had to buy was the wig and white hair spray as I already had the rest of the stuff needed.