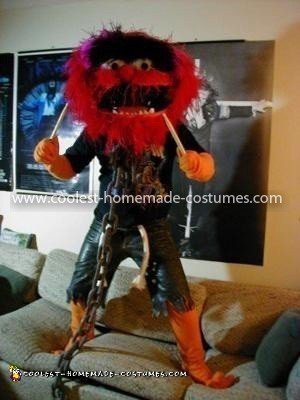 For this Coolest Animal from the Muppets Costume I began with a baseball cap and some cardboard. After building up the basic form of the top part of the head with arches, I then attached this to an embroidery hoop large enough to form the base of the head. A second hoop was used to shape the lower jaw. The lower jaw was attached in the back underneath the fur with a hinge made out of cardboard and duct tape. My head slips into the lower jaw in a hole behind the tongue. The lower jar rests snug against my own lower jaw allowing for me to open and close it to full Animal effect.

Orange felt fabric was wrapped, sewn and duct tapped over all. Pillow foam was packed inside to help keep and give the head shape. The eyes and nose were simply styrofoam Easter eggs. Loads of yards of feathers were used to give Animal his hair and attached using a glue gun. Teeth were made out of marshmallow shaped white foam and cut to form. The tongue – a pink piece of poster board material. The top part of the head rests on mine via the baseball cap. My face was hidden by wearing a black stocking.

Though you obviously can not see it via the pic – the eyes can be made to open and close. I weighted down the front part of the feathers covering the eyes with washers and attached fishing wire to three points to form a pulley system. The string ran down the back and was attached to an old key-chain that I could then pull on whenever I wanted to give Animal the surprise look.

The arms and legs were made out of the same felt fabric as that which I covered the head. The arms are just that, one piece that I slip my hands into as if wearing a T-shirt with no bottom. The shirt is a concert T for The Electric Mayhem. The over-sized Chain, a store bought novelty item. I also added later, metal spiked wristbands and collar. The feet are only knee high and slip on over my boots and attach to the pants. For Animals’ pants I cut up an old pair of leather jeans. Animals’ belt was just a length of white rope frayed at the ends.

2 thoughts on “Coolest Animal from the Muppets Costume”