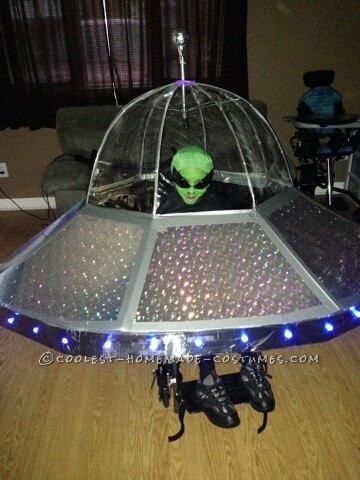 My son is 8 years old and LOVES this time of year.  We always try to build his costume to incorporate his wheelchair so he can be just like everyone else out trick or treating.  We like to try to be original and not the store bought costumes or the most popular thing of the year.

So we constructed out of cardboard, poster board, duct tape (gotta love duct tape), christmas lights and an umbrella.  Viola – we have our spaceship!!  We took four dowel rods to use as the base that set on his wheelchair arms and built the frame off that.  Took us about a day to get the UFO done.

For the alien we just dressed him all in black, with some green facepaint, a pair of funky glasses that we used permanant  black marker on the frames for the old school looking alien.  We also put a small flashlight on his lap to give the inside of the spaceship a glow when your outside at night and luminate his face from underneath for a more spooky look.

This year it rained on our Halloween night, but he didn’t have any problems as he was completely covered by umbrella.  People we yelling from across the street how cool his costume was, and asking to take photos of him.  He was definately the “best costume of the year” as many people said! I know this will be one of those years thats hard to top!