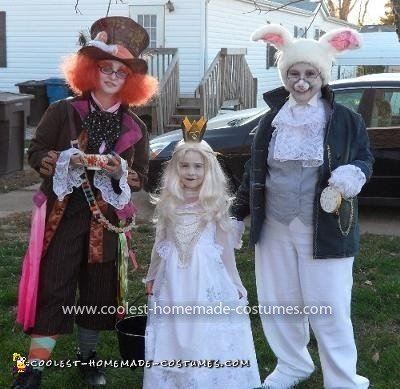 My granddaughter was dead set on being the White Queen from Tim Burton’s “Alice in Wonderland.” You can imagine my dismay…I am a seamstress (I made her an authentic Cinderella dress for a school play) so of course Gramma could accomplish anything. Her mother then decided to be the Mad Hatter and I was put into the mix as the White Rabbit.

Practically all of the costumes were items purchased at the local Goodwill. Both jackets which of course were plain and unadorned, the Rabbit’s Jacket was a small and I wear a LARGE so I purchased a pair of jeans at Goodwill and ripped them up to make the jacket larger and add the stand up collar. The ascot was made with a small lace panel from Goodwill attached to a ribbon, and the clock was painted by my daughter and attached with a chain I already had. The feet and paws were formed out of an old pair of house slippers which I completely ripped apart and formed to become shoe covers and with a pair of pink gloves the other part became the paws.

The Mad Hatter’s outfit was almost all Goodwill items, the jacket, pants, vest, shirt and shirt to make the little gloves. I found some ribbon discounted at a local store which worked well for the embellishments on the Hatter’s coat, the socks were my daughters, and the shoes were mine. All of the embellishments on the hat were made by my daughter, the hat pins and the 10/6 sign.

With the White Queen…I was lucky but it was even more work than anything else. I found a little girl’s dress on clearance for 11.95. There was no way to pass that up, since the material to make it from scratch would have been much more. All the embellishment was done by me, some by machine and some by hand. The dress was sleeveless, so I added the sleeves, neckline and the appearance of it being a corset. Thank goodness I bought myself a new sewing machine last year.

We had an incredible night with many people complementing us on our Homemade Alice in Wonderland Trio Costume. I just wanted to share. 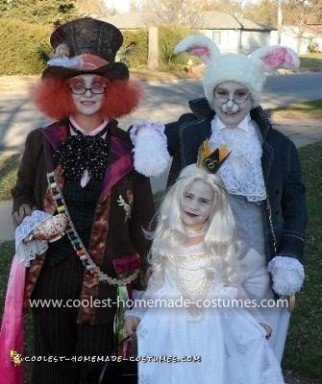 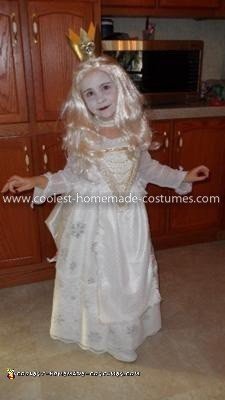