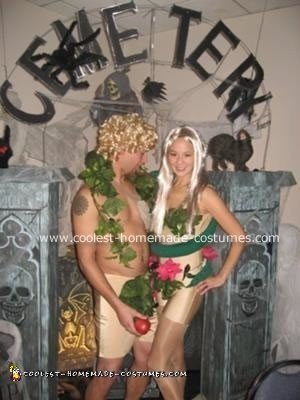 My boyfriend and I were looking for some clever couples costume and couldn’t find any at the stores so we decided to make our own. We decided to do an Adam & Eve costume.

For Eve I sewed a nude colored body suit and then clipped fake leaves off of a vine and attached them to cover my chest and crotch with Velcro (which was sticky on the backside) that I purchased from a fabric store. I then sewed a snake and stuffed it with batting and wrapped it around my body. I then took another flower vine and wrapped that around my body as well to represent the garden of Eden. I then put on a blond wig.

For Adam we basically did the same thing but made boxers instead and wrapped an extra vine around his neck. We found a Marilyn Monroe wig at the store and then bleached his facial hair blond. He carried an apple to complete the costumes.

We got so many compliments from people at the parties that we attended, and it was such a cheap alternative to buying or renting a costume. We only spent about $30 total!