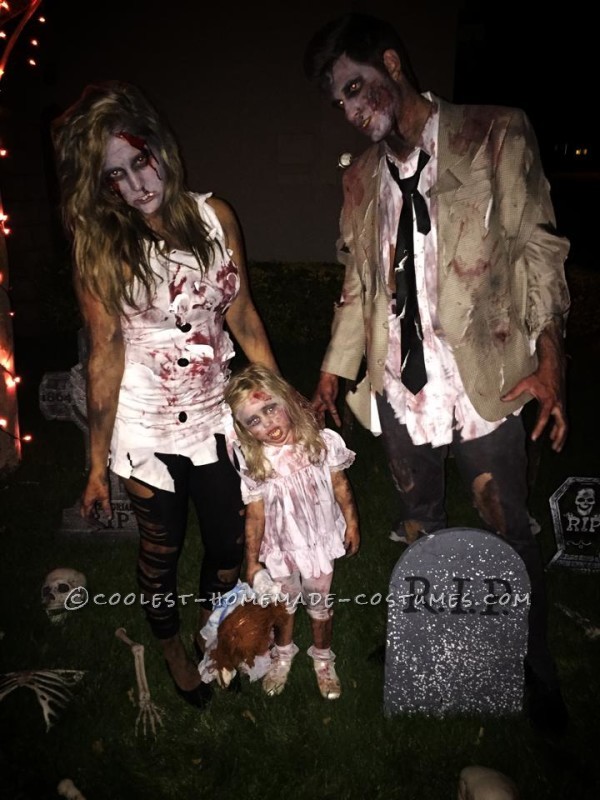 This year I wanted something scary for our family matching costume idea. One night I was watching the new season of the walking dead with my family, when all of a sudden our two year old daughter kept asking questions on what exactly the dead people were. After we explained it one time to her, during and after the show she kept walking and acting like a zombie and it gave me the idea of what this years family costume will be!

I didn’t want to look like the new zombies played in walking dead or newer movies today, I wanted to be more unique and make old fashion zombies from the 50’s/60’s era. I wanted to find clothes that would resemble from the 50’s era and the only place I could think of that would be less expensive and have exactly what I was looking for would be my local thrift stores. So I headed down and started the hunt, and to my surprise I found the items rather quickly. For my 2 year olds costume I found an old style shirt that kinda was as long as a dress and white leggings to make up for the shorten dress, to cover her up more. I looked at the shoe section and found old looking style shoes, which were a size bigger then her but I figured it was for one night only so why not! Her socks I went to the local walmart and found the ruffle style socks children use to wear back in the day.

I went to the toy section of the thrift store and tried to look for the cheapest old looking doll I could find and found a old raggady ann doll and was like perfect, 7$ total for her whole outfit and doll from the thrift store! I already had last years blood and makeup kit that I found for 5$ at walmart. I started spraying her whole body and hair with the black colored spray to give her the dirty old zombie look. I then put the cornstarch blood all over her body making it look like she’s been through a couple humans for lunch. Her face was fairly easy, I first covered it white white makeup and black makeup around the eyes. I would dab black and green throughout her face to make it seem more realistic, and last but not least I added blood splashes on her face arms and legs to complete the look!

Next I went to the men’s section for my husbands outfit and his look was also fairly easy to find, grey jeans, white button up long sleeve shirt, black tie and an old looking blazer type jacket. Now it was easier to have him put the whole outfit on so I could see exactly where would be the best places to cut and tear in his clothes. I just started cutting through out his entire outfit, trying to give him the look of a zombie. I then also sprayed black colored spray throughout his whole entire body to give him the old, dirty look. For his face and body I did the exact same way as my daughter but added a abrasive on his face that I found for 2$ at the thrift store to give him more of the zombie look. Now for my costume I wanted to find an old fashion tight dress and came up with a old fashion black and white dress that reminded me of the 50’s. I also did the same makeup and spray as I did all three costumes. To do all three of our costumes and makeup took me about an hour. It was rather easy, fun and not time consuming!

Everyone absolutely loved it! We were a hit at the party and on social media! I don’t think I’ve ever gotten so many likes and comments on a picture before! No one could believe that my little 2 year old wasn’t scared but was such the little actress, without her I don’t think our costume would have been complete! It’ll be tough to out due this one next year! 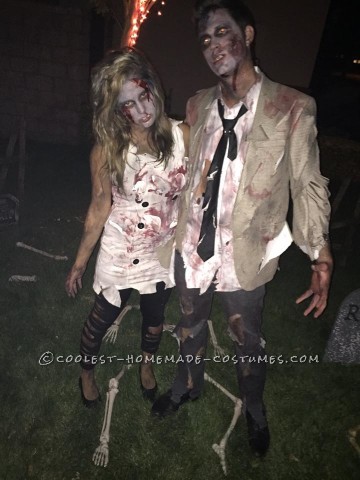 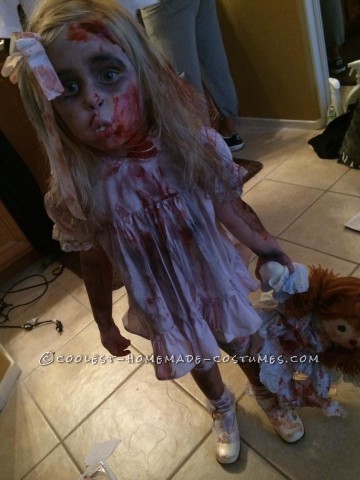