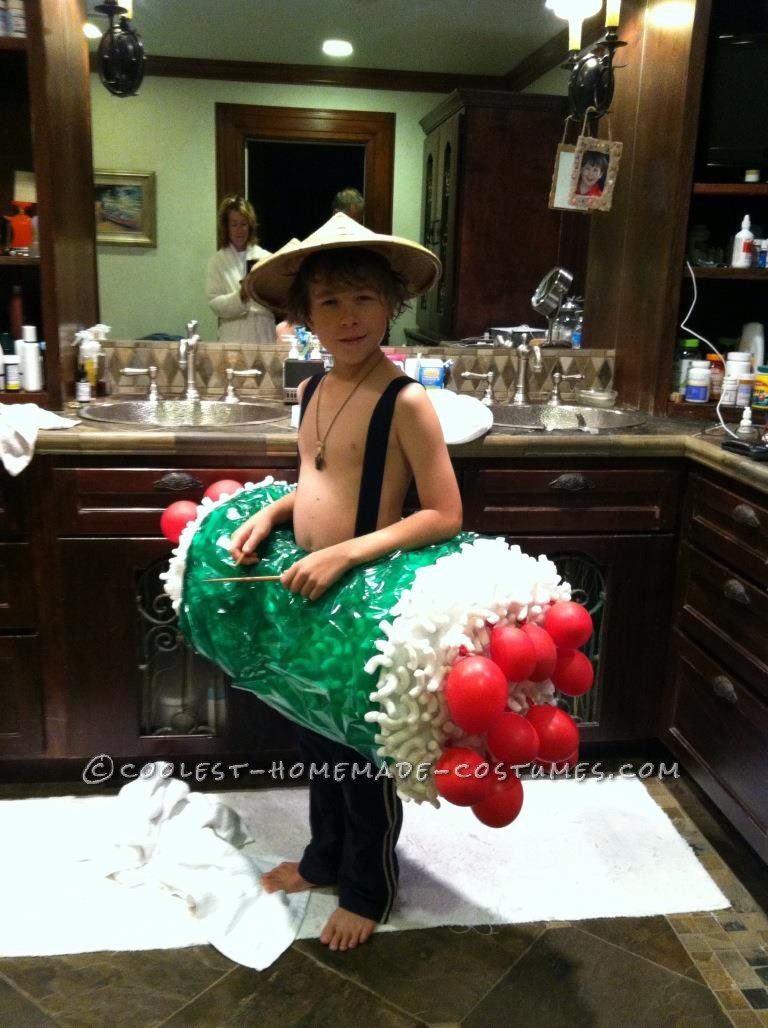 My son Beau is indeed a sushi freak.

He eats it every chance he can, and he especially loves the  salmon roe on the outside. The kids at school call him roe boy.  Well, when he told me he wanted to be his favorite food, (a sushi roll), for halloween I thought he’d lost his mind and and I couldn’t wrap my head around how I would accompish this.  I went to bed that night with sushi on the brain and came up with the idea of the roe that night.. I knew it would be small red ballons, so the idea started taking shape, so to say!   Then I figured out the seaweed wrap could be green celophane.  I didn’t know what I would use for the rice until the next day when I recieved a package in the mail.  I opened the package and all those stinking packing peanuts started blowing out…. and then it hit me!!  Those dreadful styrofoam peanuts were perfect for the rice!!  I bought a heavy duty round cardboard cylinder from Lowes and wrapped it in batting  that you’d stuff cushions with and can find at any craft store.  Next, I wrapped that in the green celaphane and started hot gluing the peanuts all over the front and back of the roll.  I added the ballons last, which was no easy task!  I hot glued them on as well, it was important to not let the glue pop the ballon.  The custome looked great! I was pleased and so was Beau we just had a problem with the weight of it and keeping it up.  We found some suspenders in the closet and we manuvered those to work in holding it up.  I added the hat and chop sticks last to make the costume more “authentic” and we were so excited about the end result!  The only problem we had was that some of the ballons were deflated the next morning. We quickly fixed that and he was ready to “ROLL”  We recieved so much attention for this costume, everyone LOVED its originality!

Im afraid of what will be expected of me for the halloweens to come!!