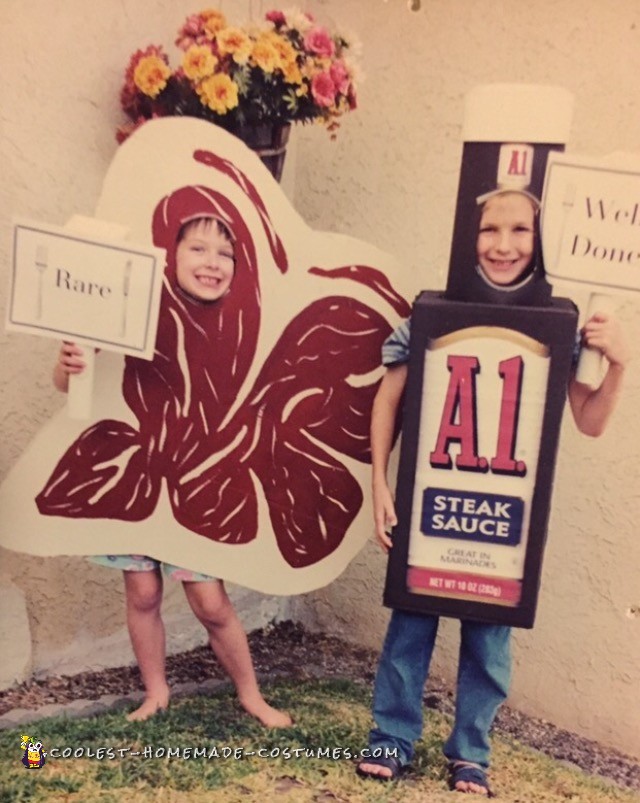 We always allowed our children to pick what they wanted to be for Halloween, with some interesting results.  One year it was a safe, another year a traffic light and even a van one year.  This time, our daughter, Lizzie, said she wanted a steak costume!

Since our son, John, is only a year older, they sometimes coordinate their costumes. So it was natural when she said steak he decided he wanted a bottle of A1 steak sauce costume! Thus was hatched the need for me to get creative with some cardboard, a glue gun and some paint.

I always try to tie in something for them to collect their goodies in, so the Rare and Well Done signs were added, and had boxes behind them for candy.

Tip:  if you’re going to have arms, legs or heads sticking out of your cardboard costumes, be sure the openings don’t rub your children or the costume won’t be worn for long.

I used plastic tubing, slit lengthwise and pushed over the edges of the costume’s holes to create a rounded, soft surface. Cardboard is great for 3D costumes, you just draw a pattern, cut it out and bend it, then hold the pieces together with a generous amount of hot glue. Voíla… your kids can be anything they can think of and you don’t even have to spend much money.  Nor do you have to be an artist.

Most of us have some acrylic paint around left over from some previous project or another, so just paint the cardboard and don’t worry about getting too detailed. Costumes are very forgiving and you want to have fun making them. I sure did with these as they came together.

I have to say these costumes got great reviews. We weren’t even out of the driveway before people were exclaiming and laughing. The kids loved all the attention as people opened their doors to find a steak and bottle of A1 steak sauce holding out their “Rare” and “Well Done” boxes for treats!

If it was just the husband or wife at the door they would call the other to the door to see the costumes and often asked to take a picture. It was just a great memory for our kids and they still talk about it!

One and Only Steak and Sauce Costumes on the Block