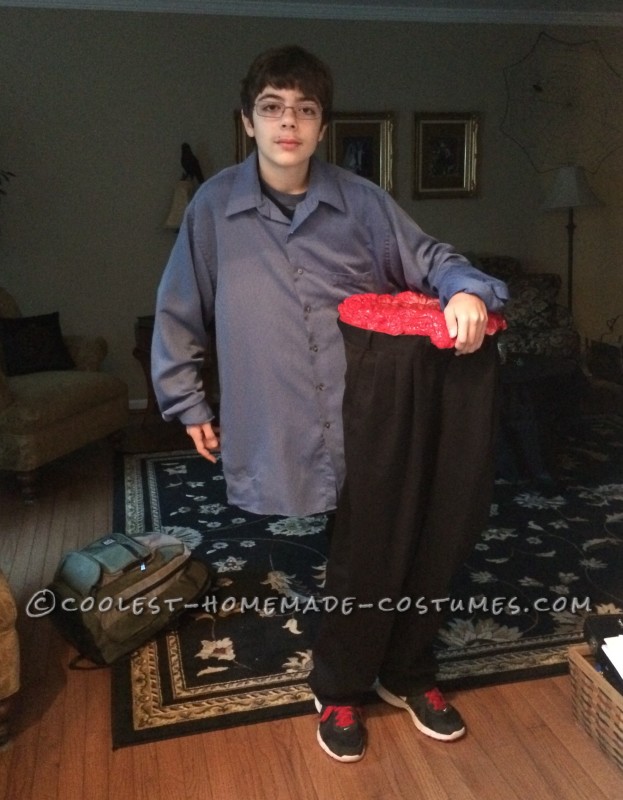 My son saw this cool illusion costume first as a magician’s prank. Searched online and found how it could be done. We thought it wasn’t possible, but he pulled it off. The weekend before Halloween, his friends had him go up to a house and ask for the phone because there was an “accident”, plus go inside a supermarket and ask for the band-aid aisle. And last but not least, he won best costume at school. On Facebook, my friends shared the picture and we stumped a lot of folks on how it was done.

So here it is:

The local thrift store provided the start (clothes were $3 a piece). Shirt must be twice the size. Magnets were then taped on the inside bottom to keep the shirt weighted down. Made a hole in the back of the shirt so that you can slip in and have both the back and front of the shirt in the front. The pants were also double the size. Black is best. He wore black jeans which blended into the black dress pants. We slit a hole by the calves so he can slip his legs in. The top is a oval piece of wood from AC Moore ($4). We bought guts from the Halloween store ($17) and also used a product called Great Stuff; its for wall insulation and we spray painted it red. We stapled the wood to the waistline of the pants.

Then my son learned to walk a bit crooked, giving the illusion that you see. Sometimes he had a walking stick which helped. Two improvements could be a fish line over his shoulder and thru the pant belt hoops, because it was tiring to always hold. Another one was a hole in the middle of the pants (from the top) so his Halloween bag could be inside.

Each year he outdoes himself. He has been a bush (where he could jump up and scare you), a huge skeleton capturing a baby and now this. This however, may be tough to beat. 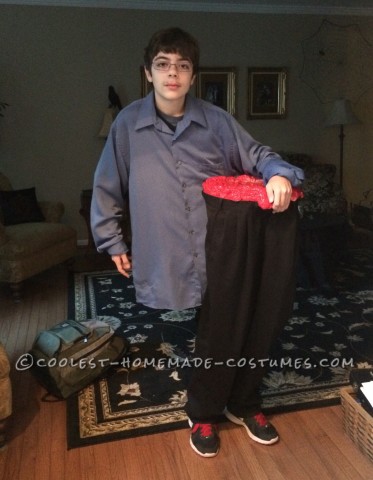 4 thoughts on “Cool Illusion Costume: Half the Man I Used to Be!”