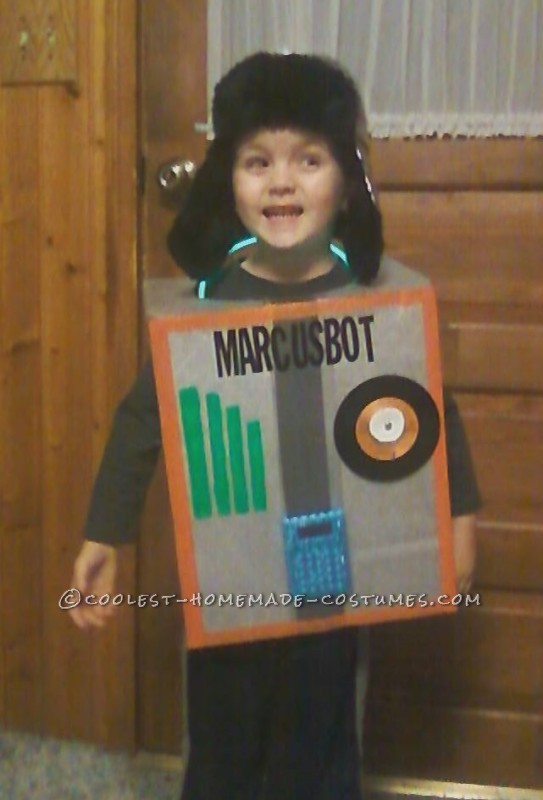 Well, up until Friday the 25th of October, I has been under the impression for several months that my son, Marcus was going as a Minion (from the movie Despicable Me). This is what Marcus had been telling me for MONTHS. Friday, the morning of 10/25, my son informs me that he’s going as a robot for Halloween. So I agreed, even though I had already purchased bllue overalls & yellow hoodie and other items to make a Minion costume. We weren’t really going to be out any money because those items could be worn as regular clothes too. He talked about this all Friday, while I was at work. I get home & am picking Marcus up to take to his Father’s house for the weekend & he is again talking about his Robot costume, so VERY excited & describing in detail, as only a 4 year old boy can, exactly how he wants the costume made. We were discussing procuring a box & as we were leaving the house, my mother said we could go to the local, small town grocery store on Monday for “a box fitting”, which made me laugh till my sides ached because it sounded more like my mother was talking about a Tux Fitting for like a wedding or Prom! I found a box over the weekend that would work & put a couple coats of silver spray paint on it. I had ideas of using colored electrical tape & taping glow sticks on it to make it light up. I had alloted a 2 hour time-slot as the estimated time required to make this robot costume on the pre-spray painted box. Monday night, after I got home from work, Marcus & I started. We measured a headhole & armholes & cut them out, using an exacto knife. I reinforced all the box seams, both inside & out with a few layers of silver duct tape.  I then measured out strips of the colored electrical tape I had purchased & attempted to attach them to the spray-painted box, with Marcus supervising & giving technical advice, excitedly. The electrical tape, however, would NOT stick at ALL! By this time, it was about 8pm, my mother claimed she was going to the nearest big town, Platteville, which is 30 minutes away, because she needed to pick up some groceries & she said she would pick up some markers. I specified the colored Sharpie Laundry markers. MY mother came home later that night, after Marcus had gone to bed, with Crayola markers because they were cheaper…which I totally agree with. I had the next day, Tuesday, off of work so after breakfast, Marcus & I got started working on the costume. The Crayola markers pretty much absorbed right into the spray painted cardboard. I figured after several coats, it would start to become more visible, but I was mistaken. Marcus & I worked all morning with the Crayola markers but could only see a faint line of color. So I went to Platteville with Marcus and we got the colored Sharpie markers I had originally wanted. These also, absorbed right into the cardboard, only faintly more visible than the Crayola. I then opted for acrylic paint, which worked fabulously! I painted on a red stripe outlining all four sides of the front of the box. After 3 coats had dried, I hot glued an old, blue jeweled calculator to the front & attempted to hot glue a cd disc to the box, but apparently, cd’s can’t be hot glued, it popped right off! So I used a brass brad to attach it, as an electronic dial, of sorts. Then I took neon green acrylic paint & drew on signal bars on the front & took the stick-on rubber letters that we use on our mailbox & I spelled out ‘Marcusbot’ across the top front. I had planned a robot hat using leftover spray painted box pieces & metallic pipe cleaners (to make an antenna) but the found out there was potential for a lot of rain on trick-or-treat night so I found a silver hat in the girls’ section at Walmart for 6 bucks that would work perfectly plus allow for rain/cold & damp weather. A 2 hour project ended up taking 3 days!!! but it turned out GREAT and when Marcus went to his daycare Halloween party, every other kid there had cheesy, tacky store-bought costumes & they all fought over Marcus’s costume & it was by far the cutest!