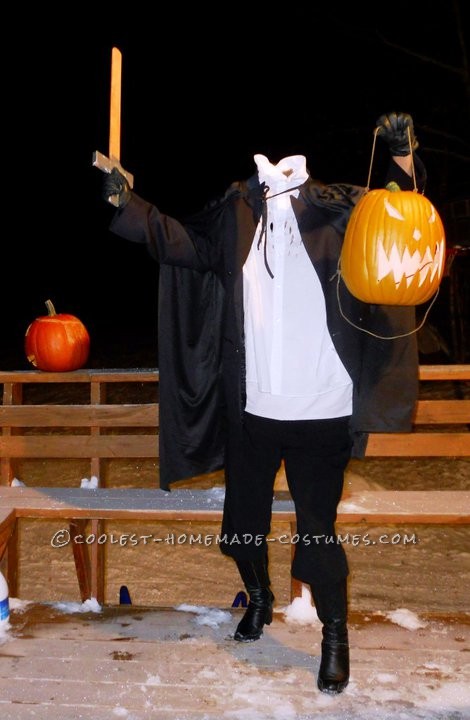 I came up with the idea to be the Headless Horseman, because the story was so frightening when I was growing up in Alaska. We have plenty of lonely trails to get from here to there, so the story always entered my mind as I was walking home alone.

I bought the old blue button-up coat from Value Village, because it looked like an early American style coat that Ichabod Crane might’ve worn. I also bought the white high collar shirt and black boots from Value Village. I cut a medium size cardboard box to fit over my shoulders and made a hole so I could see in front of me. I stapled the shirt to the cardboard box, so it wouldn’t fall around and reveal the box. I made holes in the front of the shirt, so I could see where I was walking and look around the room.

I sewed the black cape I had from a witch’s costume onto the collar of the jacket. I wore my black pair of pants and black leather gloves, because they fit the old style theme of the outfit. I bought a foam pumpkin from Michael’s and cut out a scary pumpkin face onto it. I made holes on both sides of the pumpkin and looped leather shoelaces to make a handle in order to hold the pumpkin over my head. I borrowed a wooden sword from my nephew, so I could look like I was ready to cut some poor stranger’s head off on one of those lonely Alaskan trails.

I wore the costume to bingo and won the grand prize of $250! During the judging, I walked around swiftly and looked as ominous as possible with the little bit of view I had from inside the costume. I’m only 5’2, so with the boots and box over my head, I looked much taller. I didn’t speak. Everyone was laughing and making comments because the costume was scary and they couldn’t figure out who was inside the outfit. I was sweating profusely inside the costume, but it was well worth it. Fun!!

I went to Boston’s for another costume contest later on that night and again, I didn’t reveal whom I was. I walked around silently and every once in awhile, I would yank the pumpkin head and sword in the air like I was looking for another head. Everyone would back up when I passed or would come close to see if they could see my face. I was even dancing away on the dance floor to the latest hits. By the time the costume contest came around, I had made a lot of fans, so I easily won the contest and a Coors Light refrigerator!

By the time I went to the last bar in town, I was hot, sweaty, and tired, but went anyway. I had perfected the Headless Horseman persona by then, so entertained everyone with my scary “get you!” movements and sword raising. There was loud applause and plenty of laughter during the judging, but I lost out to a girl wearing next to nothing in a super-hero costume. I had a grand time and will never forget the evening. The Headless Horseman lives on in Alaska!!!