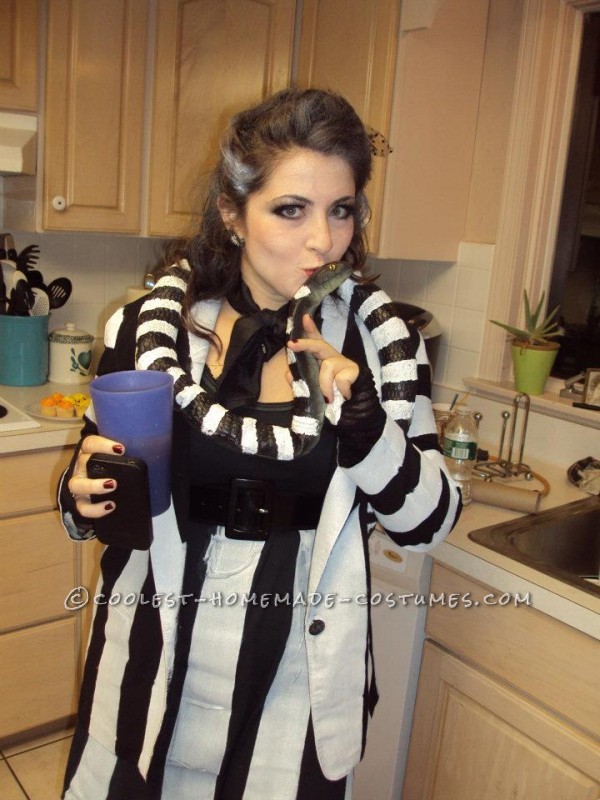 I wanted to create a Beetlejuice costume with a twist that was clearly Beetlejuice- but also had a little bit of my own twist to it .. plus I wanted it to be a costume for a girl. I began by dying an old dress I had laying around. It was dark green originally, so I used a color remover first and then 2 rounds of black RIT dye in order to get a deep black.

I picked up an old black blazer at the Salvation army and some black and white fabric paint. I taped out vertical stripes on both the dress and the blazer, and began painting the whole dress white, so that when tape was removed, the black stripes would be perfect. While the white paint was still wet, I added some glitter for a subtle bit of glam. After the white was dry, I removed the tape and cleaned up any edges that bled with the black fabric paint.

I had an old pair of lacy tights that I cut up using a razor. I did buy a giant snake at Spirit and I painted it black and white and wore him around like a scarf all night (you know the part of the movie where he turns into a snake?). I tied a black piece of fabric around my neck to create a bow tie. For my makeup, I used a little bit of white halloween makeup…I wanted to be pale, but not snow white. I wore dark gray, black, and purple eyeshadow, and red lipstick. I teased my hair and sprayed some white streaks in it and sprayed it all over with green and purple glitter.  I wore a big black belt around my waist and some black combat boots.

I was really happy with the outcome. I got complimented all night, and everyone knew who I was supposed to be right away!