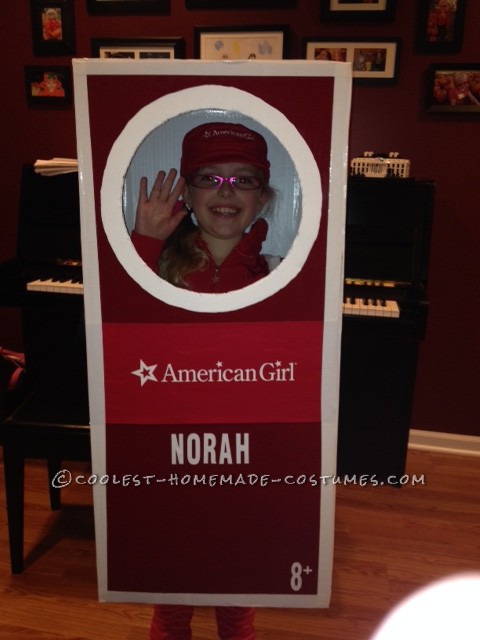 Our daughter, Norah, LOVES her American Girl, all of the stories and all of the fun involved with the AG experience.  So it was no surprise when she decided a year ago that she wanted to be an American Girl for Halloween.  The big decision though was which doll she would be.  Kit, Julie, Molly….so may choices.  In the end, the decision was clear…she is an American Girl, so she could be an original doll in her own American Girl box

We had so much fun recreating the classic AG box and it was surprisingly simple.  We started with a sport utility moving box from U-Haul.  And then, one quick trip to the hardware store (with our real AG doll box) where we got the rest of the supplies needed….AG box paint colors to match the base red color (spray paint) and then pink star colors (two sample size jars that the wonderful paint counter staff made to match), white duct tape, white contact paper and 2 sponges.  We already had all the other supplies needed at home (scissors, large bowl, craft glue, velcro strips and a large American Girl store bag).

To make the box trick-or-treat friendly, we cut the bottom off so it would hit just below Norah’s knees, cut the front like a door, so she could open it when neighors gave her candy and used a large bowl to trace (and then cut out) a face hole in the front (so she could see out just like a real doll).  To decorate the box, we started with a few layers of the red spray paint and let it dry outside to take away the paint smell. Second, we traced stars onto the two sponges, cut them out and used them to sponge paint alternating pink stars on the sides of the box. Step three was covering the back of the box and the entire inside of the box with the white contact paper.  Step four, we cut the side off of an American Girl store bag and pasted it to the front of the box (we felt kind of guilty about that).  Fifth, we covered all the corners with the duct tape to get the true clean look of the AG box.  Sixth, we used the contact paper again to trace out the big white stars (for the sides) and the lettering to spell out her name and then the 8+ for the front of the box. Then simple stuck them on. The last step was cutting slits in the back of the box to slide through velcro strips that were used to hold the box on like a backpack (so Norah would be handsfree).

It is amazing what a box, paint and duct tape can do.  (Plus…since it rained all Halloween, the costume had the added bonus of keeping our daughter warm and dry.) 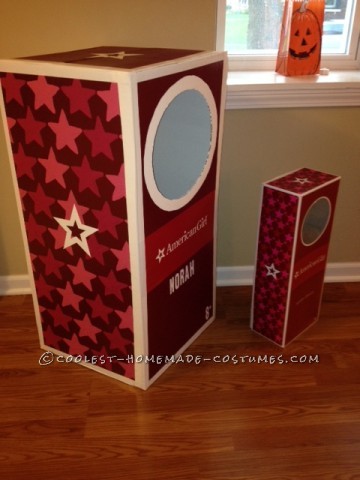 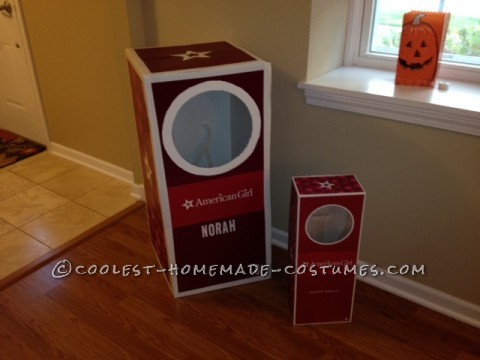