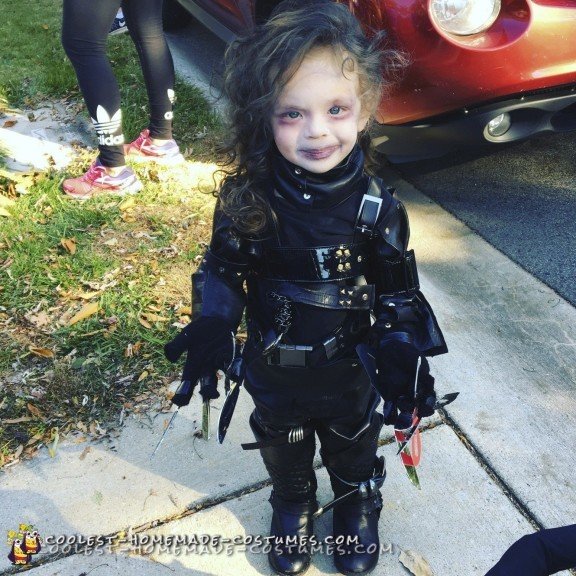 For my materials, I actually used an old pair of leather pants I had from around 10 yrs ago. I also took a sports sleeveless black boys shirt and used a vintage snap press that I had gotten at a yardsale, knowing I would need it one day.

I cut the legs off the pants and used them as sleeves and as different bands for the costume. I used the snap press to snap the sleeves to the shirt.

I took the real leather pants and just cut legs shorter to fit my son. I took them in on the sides using velcro and, Tah Dah! baby leather pants! I’m tempted to have him wear them to preschool.

The bands are made out of old belts and pieces of scrap leather from the pants. I bought some metal studs and put them on the bands.

No Edward Scissorhands costume would be complete without the famous scissor hands, I used kids’ gloves and sewed them to fit his hands. I took plastic knives and cut the sharp teeth and handles off. Next I took black electrical tape and taped the knives to the gloves.

Bodi loved his Edward Scissorhands costume and so did everyone else. We hope you love it just as much as Bodi did!!

P.S. He actually says he wants a water bed because of this movie (you can guess how hilarious that scene was). I told him I would have a hard time finding one of those nowadays!