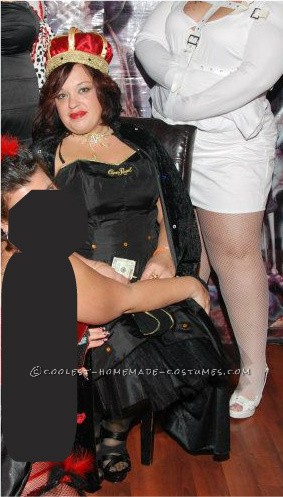 I love Crown Royal. Fit for a Queen (or King). I bought a dress on clearance from Deb. Cost me a whole $7. First, I cut a Crown Royal bag into 3 pieces, logo, and both rows of gold stitching.  After that I sewed the logo onto the dress, then the stitching along the top of the dress. Glued stones on the skirt of the dress. Bought a black velvet cape, cut the hood off. I copied the Crown logo and traced it on (backwards) interfacing which was two sided, iron on kind. Pinned it to the cape and ironed it on.

Glued gems all over the front and back of cape. Making the hat—measured my big head, cut out a strip of plastic cross stitch.  Cut out 6 thin strips of the same plastic. Sewed a sleeve of gold material (same as the material I used for the letters on the cape), slipped each plastic piece into one. Hand sewed the strips on the crown, Glued red silk in the middle of the crown and stuffed it with tulle so it would stand up a little. Glued a Crown cap on top of crown. Glue gems on it.  I carried a black Crown bag as a purse. Won first prize in the contest.

Got a ton of compliments and pictures taken. Even a few shots of Crown bought for me.