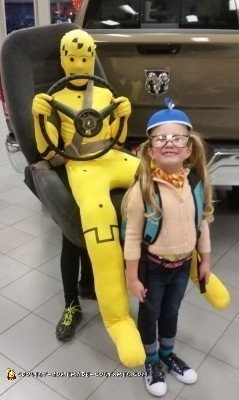 My kids and I spent 2 hours in one of those Big Box Halloween costume stores and left with nothing more than a crash test dummy body suit.

Our family is known for our costumes and I knew that just the suit wasn’t going to cut it. That’s when the fun began. My son was the rocket man the year before and the illusion part of the costume was a big hit, so we started thinking how we could do the same sort of thing again.

Working in the automotive industry, we had access to an old seat, seatbelt, and steering wheel. My husband was able to take the seat bottom and back cushions off the old seat frame. We cut a hole through the bottom cushion big enough for our son’s waist to fit through.

I tried to sew the seat belt to the seat, but that proved to need the abilities of a commercial machine that we didn’t have access to. We then cut the dummy body-suit in half, just along the back and around the sides. We stuffed only the legs with batting and were all ready for Halloween morning! It turned out great! His upper body in the

It turned out great! His upper body was in the dummy costume and his lower body in black leggings. We used large clamps to hold the seats together and the seatbelt to the seat. We would have a better solution for this part next time, but it worked.

The seats wanted to pull apart because of the weight and movement. We continued to reclamp throughout the day at school and evening tricker treating, but it was worth it. We belted him in the seat and he drove away with the steering wheel in hands. This costume got the most head turns and laughs and OMGs yet. Huge hit, pretty simple in comparison to years prior costumes and so unique. Super fun!!