I was invited to a 1980’s themed Halloween party this year. As I am a Bald by choice man, and the 80’s were all about the hair, I was frazzled. Until I remembered one of my favorite 80’s characters..Robocop. I started to look up old photos online, and found that this has been attempted before, and it was pretty nice.

I did a lot of research on pictures, and after that research I began making the costume with a month and a half to go before my first party. I used cardboard, Modeling Clay, duct tape, and a lot of hot Glue. Obviously I used spray paint as well. It took about a month and a half, and many layers of cardboard, etching, and cutting, but I completed it with a couple days to spare. I made sure to make the gloves out of cardboard with moving fingers, and arms and legs were hinged so that I could move around easily, and not trip. The visor was made from old pop bottle with window tint adhered to it. The top of the helmet was modeling clay, which was the only part of the entire costume not made with cardboard or duct tape. I used primer as a base coat, and then sprayed two layers of metallic silver paint. It became more realistic with every layer. I had to carve 3 layers of cardboard for the arms and legs so that the details in the sides were there.

I took home best costume at 2 parties so far, and I have a few more to go. I appreciate all the comments it got on detail, because I spared nothing to get the slightest of details into this. Lot of burns from the hot glue, and a lot of late nights, but well worth it. I can actually walk around in it, and everything. Hope you enjoy seeing it as much as I enjoyed making it and wearing it. So much fun! Who says Halloween is just for kids 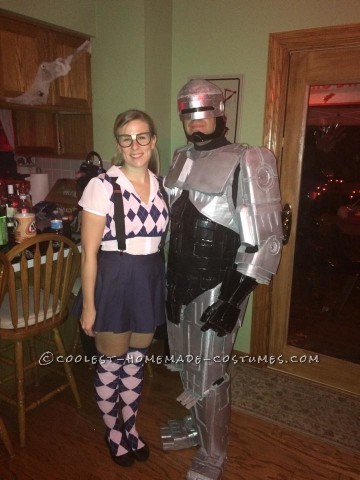