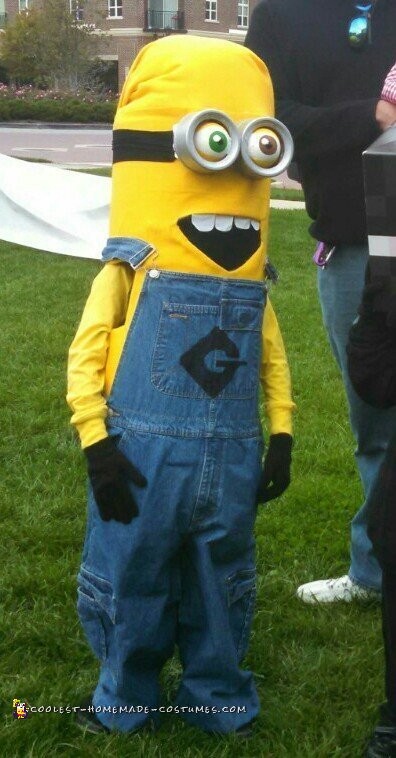 Malcolm told me after seeing the minion movie that he wanted to be Bob for Halloween. He didn’t just want to dress up like a minion but to become Bob. I put my thinking cap on and came up with an idea. I searched all over online, Pinterest…everywhere to try to get an idea, nothing really helped, so I had to go it on my own.

I was in hardware stores and craft stores.more in the past month than I have in my life, I would just wondering through stores until something sparked in my mind and once it did there was no stopping me. My son was of course in on all of the creative process. He helped me match up yellows and find the proper color for eyes as well as the proper fit for the Styrofoam balls. He was constantly being asked to get in and out of the costume on a daily basis. So the most important part or the costume is my son and his minionese that he spoke. That made the costume not just a costume but an actual minion.

The base is a concrete form. It was a pain to cut the arm holes and mouth but I did it! The goggles are PVC pipe fittings painted silver. The eyes are Styrofoam balls shaved down to be a perfect fit. Then I painted them to match Bob’s two colored eyes, also like my son! I think that is why he was drawn to Bob and Bob is crazy cute too.

The whole body is covered in yellow felt and hot glue (so were several fingers) the mouth is a wire frame (hanger) which I fought.with to form into the perfect shape for the mouth. I then covered it with black pantyhose and that is where my son actually look through. I painted some shoes black and he wore some black gloves. The overalls were found at goodwill and I took the stitches out of the crotch for my son to wiggle into the tube. The overalls were also hot glued to the form, we tried to make it without gluing the overalls on but it was a huge pain.

The top of the minion head is a bowl and paper mache. The inside of the head is stuffed with pillow fluff. The costume was tilting forward so I made him a small pillow that I covered with yellow felt and stuffed in at his chest.

The biggest joy I’ve had is seeing his face light up when he saw a picture of himself for the first time.

He gave me a huge hug and said he was a real minion. All day he spoke minionese and was asked by several kids and adults if they could take a picture with him. He wasn’t just dressed up as Bob. He really became Bob for the day/night.

It was worth all of the nights cutting and hot gluing to get that amazing hug from my guy! Making my son’s dream come true was awesome! He is already thinking about next year!! 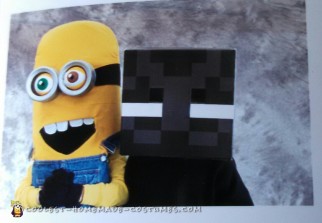