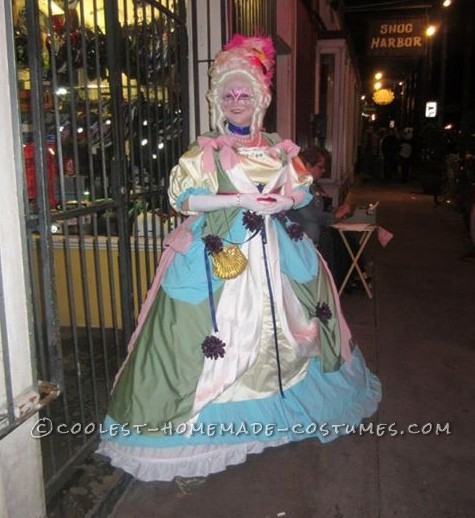 This Marie Antoinette costume took forever but was a lot of fun!

From the top down… I bought a wig and wired in a ton of birds, flowers, plastic beads, etc. Then I glued a large pink ribbon in a loop, glued a big fake jewel over the overlap, and pinned it over the wig. I stuck a big ostrich feather under the ribbon.

For the face, it’s just white face paint with circles of rouge. I recommend whiting out your mouth too and doing a tiny cupid’s bow in the middle. You can’t see in the pictures, but there’s also a beauty mark. The mask is a cheapo masquerade mask, but I lined it with stick-on moleskin for comfort. The necklace is just ribbon with a big fake jewel glued on it, and then some fake pearls looped around.

The dress was nuts. I picked up two prom dresses from Goodwill and basically chopped them in half to create various layers. I won’t go into specifics because each dress would be so different. Besides, it was somewhat difficult, as I’m not much of a seamstress, and I’m sure most people with sewing skills could do a better job. Then I draped a bunch of blue fabric underneath (because the hoop will make normal-length dresses too short), and put the excess in two bunches on the hips. I made puff sleeves out of elastic and a wrap that came with one of the dresses. The shawl thing was already attached to one of the dresses and I didn’t remove it. For me, the hardest part was getting the blue fabric underneath to be even. When the dress was flattened to create a pannier effect, it made some of the portions shorter and some longer. You can see in the pictures that it wasn’t really even.

I bought a cheap wedding dress hoop skirt. It comes round, but the loops are really flexible. I sewed ribbons into the front and back, then tied them together on the sides to create a flatter pannier effect.

Lastly, I glued a TON of fake flowers all over the dress, tied a ribbon around the middle, and put on some elbow length gloves and lots of gaudy jewelry! With Marie Antoinette, you don’t want to go subtle – just keep piling on the stuff, and get a good wig. 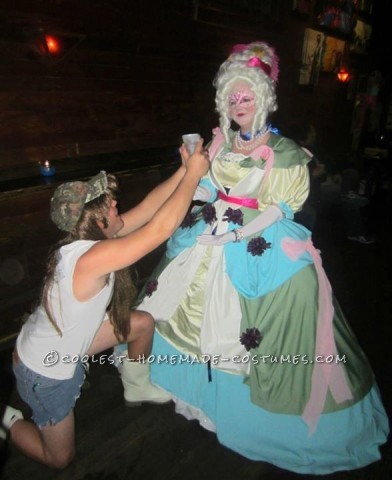 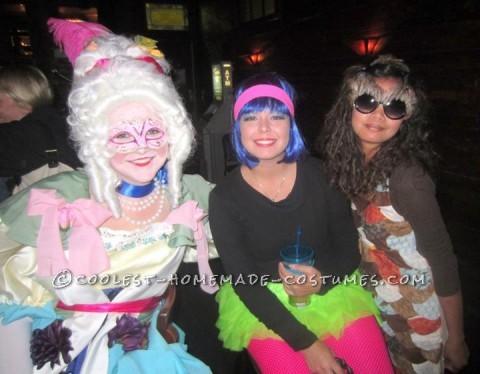