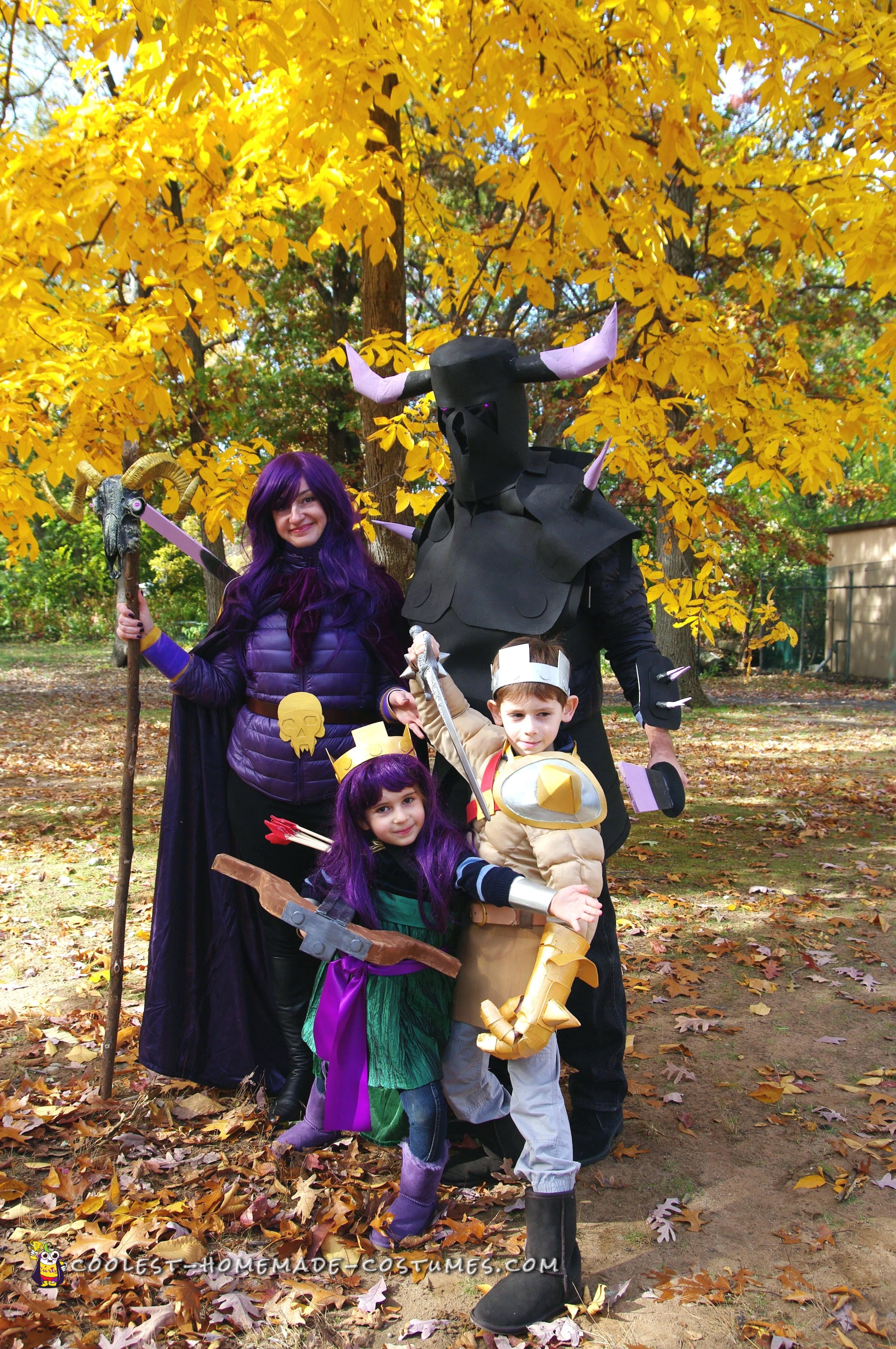 It all started innocently enough. My son liked playing Clash of Clans and wanted to dress up as the Barbarian King for Halloween. No problem! There must be one for sale on the internet! Right? Right?!? WRONG! I guess SuperCell has not licensed the characters for costumes, so we decided to make our own. Summer vacation had just started and it seemed like a perfect quick home craft project.
A few attempts with craft foam and leather straps and we had the spiked shoulder pad. A bit more thought and trial-and-error and the spiked glove was born. The rest was pretty easy and involved one of our first “painting parties” where the kids each got a brush with a different color and the pieces went around the table.
But of course our daughter no longer wanted to go as Cinderella! The obvious answer was to make her an Archer Queen! We made her a second crowns from the very beginning (to avoid open war for his) and she already had a green dress. One wig a cape, a sash and some bracelets later, and she was almost all set… except for the crossbow… It’s huge! And craft foam doesn’t hold its shape when it’s that big! So this became a carpentry project. We cut a thin piece of hardwood for the bow frame. Quickly realizing that she wasn’t going to carry something that big made out of solid wood, we thickened it with layers of Styrofoam, then covered that with craft foam and painted it metallic and wood.
And that would have been that, but it was only August! What were we going to do with all that time and leftover craft foam??
P.E.K.K.A. armor plates seemed straightforward enough, so the project turned into a tailoring one. We made the front and back halves of the “shirt”, then a separate piece for the shoulder pads and “armor skirts”. The problem was that the foam wouldn’t hold at soft 90 degree angles, so we had to glue in some wire from coat hangers to hold it in place. Then came the helmet. Do you have any idea how hard it is to make two-foot horns stick out of a helmet horizontally without breaking off? More coat hangers to the rescue! Then black gauze for the eye slits and some LED lights for the “eyes” behind the gauze.
Phew… Wait! What about mommy?!?
There’s not a lot of female characters in Clash Of Clans… the archers don’t look that different from the archer queen… The Valkyrie is nearly naked so that won’t work very well in near-freezing cold… That leaves the witch.
The cape and wig were easy enough, and the shoulder “epaulet” and belt skulls were pretty easy compared to the PEKKA armor, but then came the staff… For some ungodly reason, nobody sells toy goat skulls on the internet… They’ll sell you a real goat skeleton but not a light toy skull. We were close to ordering a custom 3-D print of one when we finally found a Halloween store that did sell a plastic one, so we lucked out. After some gold paint for the horns, a couple more LED eyes and trip to the nearby woods for a big branch (then sand paper and a ton of glue), the staff too was ready with only a couple of days left before Halloween.
Moral of the story: NEVER finish a project months ahead of schedule!

Archer Queen: store-bought dress, cape and wig. Crown, quiver and bracelets made of painted craft foam. Bolts made of wood/craft foam and X-Bow is a wood core, Styrofoam filling and craft foam skin.

P.E.K.K.A.: Store-bought LED “candles” for eyes (inside 2 layers of semi-transparent gauze fabric. Painted balsa wood swords. Everything else is painted craft foam with some wire hanger pieces for support (to keep the armor from collapsing or to keep pieces bent. 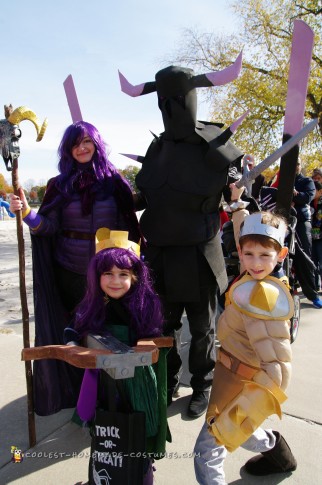 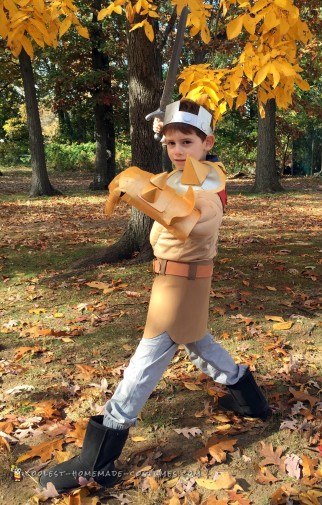 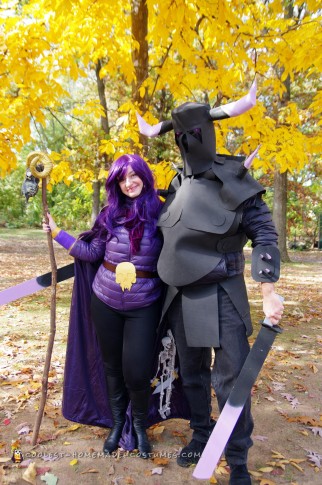 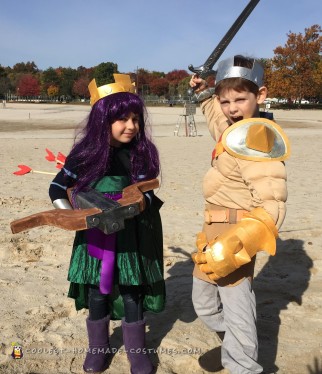 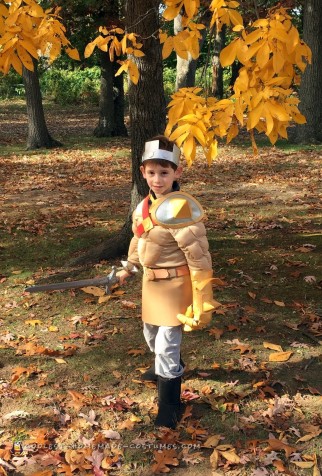 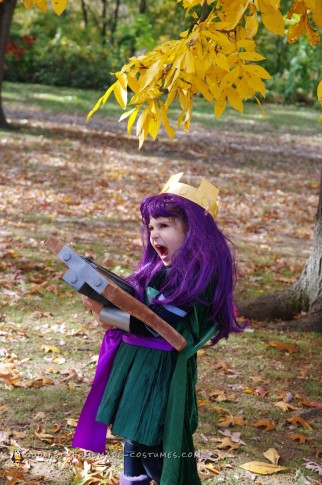 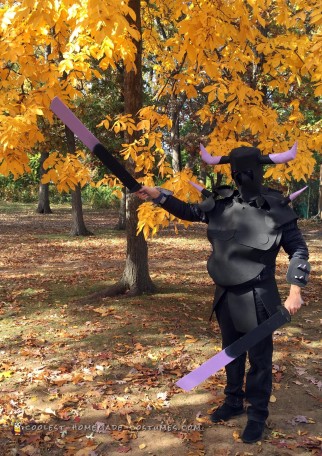 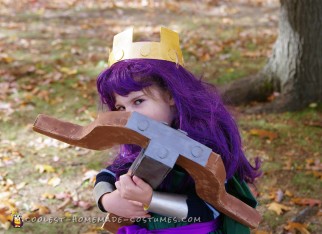