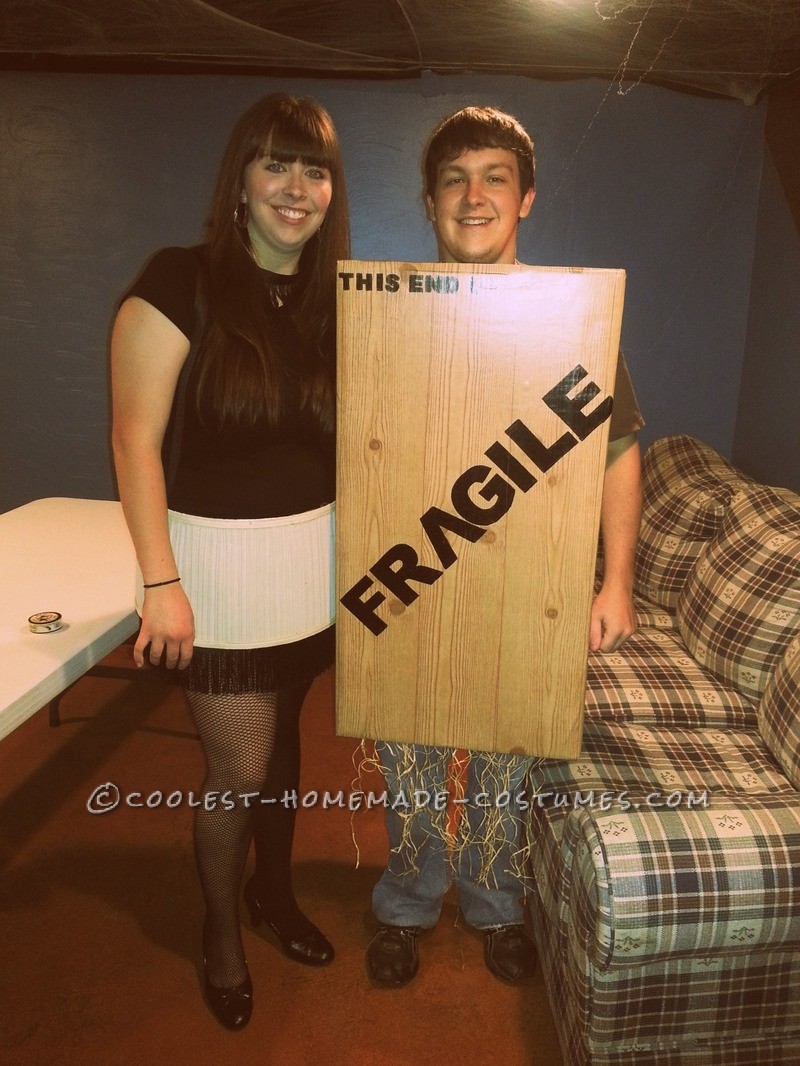 This Christmas story leg lamp and fragile crate couple costume was a hit- and it was inexpensive and pretty easy to make.

For the crate (easiest of the two) we found a big box (one that seemed long/big enough to actually fit a leg lamp in). We cut out a hole in the top for the head and then two holes in the sides for arms- kind of guessed where they went but then measured with a tape measure so they were even, and used a circular object to form the shape before cutting out the holes. Next we covered it with contact paper to make it look like real wood ($2 for a 9 foot roll at Big Lots- we bought 3 rolls but didn’t quite use it all.) We then cut slits in the contact paper and stuck it to the inside so that both the arm and head holes were open. Then we found a font on Microsoft Word that looked like the font on the crate- blew it up and printed it out to make stencils- and then sharpied on the letters. Glued some craft straw to the bottom and voila- complete.

The lampshade took a bit more time and money. I actually found the lampshade in my mother’s attic. She had a round plain lampshade. I then took the cover off of another lampshade and glued it to the outside of the other lampshade- to give it a more lamp-like look. I purchased the fringe at a craft store (Jo-Ann Fabric $5.99 a yard.) I needed about a yard and a half- which I then hot-glued along the inside of the bottom of the lampshade. The lamp was too big to stay up on its own so I purchased some black ribbon to make straps out of (Michael’s $2.99 for a 7 yd. spool.) I hot glued the straps on the inside. Then with the left over fringe and some of the ribbon, I made a fringe necklace.

To top everything off I wore a plain black top that I already owned, purchased two pairs of tights from Walmart- one plain black pair and a pair of fishnets (about $3 each) and wore a black pair of heels which I had as well. I cut one leg out of the black tights so that the fishnets would make my one leg “stand out” like the leg lamp, and my other leg sort of blended into the background and was not as noticeable.

Leg Lamp – The Best Costume I’ve Ever Made!