Take a look at the most amazing photo gallery of homemade children costumes, how-to tips for making your own, and lots of Halloween and costume party ideas. You’ll also find loads of homemade costume ideas and DIY Halloween costume inspiration. 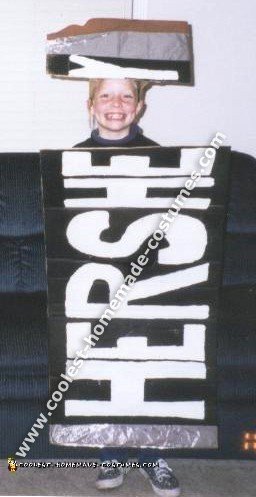 My daughter and I were trying to come up withan idea for different children costumes. She wanted to be something that no one else would be. Then I came up with what I thought was the greatest homemade Halloween costume idea; she could go as a candy bar!

For the homemade Halloween costume we took a cardboard box and made the main part of the candy bar from her feet to her chin. I painted it with craft paints and added aluminum foil at the bottom.

I put handles on the back (just some cardboard pieces that were taped down for her to hold the bar). The top part was just a smaller piece of cardboard painted with ‘torn’ aluminum foil and then the exposed candy bar with a bite taken from it.

I looped a cardboard strip to the piece for her to wear as a hat. She got so many comments on her costume about how cute and original it was.