We recently watched the movie Edward Scissorhands with my 7 year old son. He immediately said that’s who he wanted to be for Halloween.

I looked online to buy him a costume but there wasn’t anything available. So I decided to try and make one myself. I was kind of worried since I’ve never made a costume before. I went to Goodwill and got a used Darth Vader costume to use as the shirt and pants. I also got about 6 studded belts which I cut up and arranged on the chest arms and leg area. I hand stitched them onto the Darth Vader costume.

I made the hands with black mittens that I had and attached plastic silverware knives that I got from the dollar store with black electrical tape. The total cost to make the costume was less that $20 and a couple nights of my time to stitch on all the belts. It was totally worth the effort.

We went to 3 events and everyone was calling him Edward and wanting to take photos of and with him. Many said it was the best costume that they saw all night. I was just relieved that my stitches held up and that I didn’t have a naked kid walking around with me. 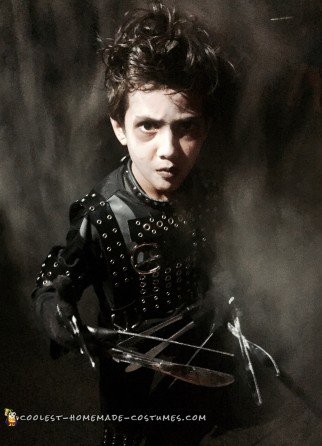