This dental floss costume is a real cheap costume to make. I luckily found a cardboard box which was in a rectangular shape that could fit my daughter inside. I then cut off the ends and placed my daughter inside with her head sticking out of the top. Then I estimated where her arms were and cut out armholes on the sides (after she was out of it of course!). Then I added scraps of other cardboard to make the top with just a circle for her face to peek out of. I wanted it to resemble the dental floss box as much as possible.

I glued everything with a glue gun for ease and speed. Then I covered it all up with white satiny material which I bought at Wal-Mart. Then I copied a recognizable dental floss logo onto the front. For the top blade I made the shape out of cardboard and then covered it with aluminum foil to make it look like the metal blade. Then I even cut off a bit of some rope and glued it to underneath the blade and leading to a small hole coming out of the top of the lid just like a real floss box. 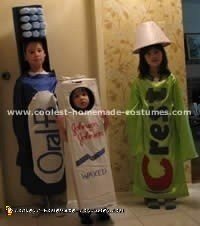 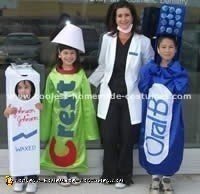