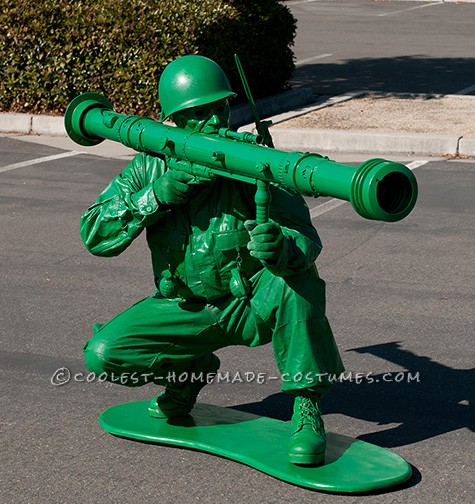 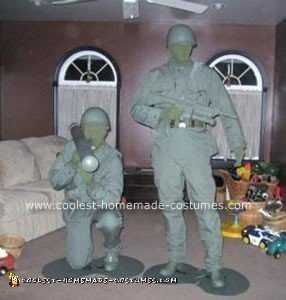 All of this costume is homemade from scratch including the Bazooka and boards for our feet. Everything had to be spray painted weapons, bullets etc. Allot of time and effort went into this costume. We hope you enjoy it as much as we do. Thanks for all your support. 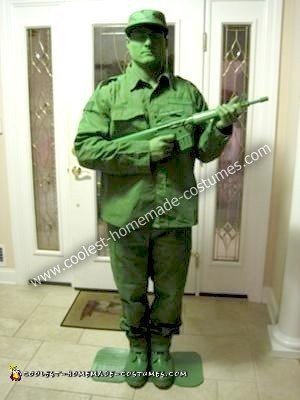 I made this Homemade Green Army Man Costume for my husband. He looked just like the little figures that come in a bucket and which also featured in the movie “Toy Story”. The first thing I did was buy a few tubes of non-smudge green face paint. I then matched the color exactly with a … Read more 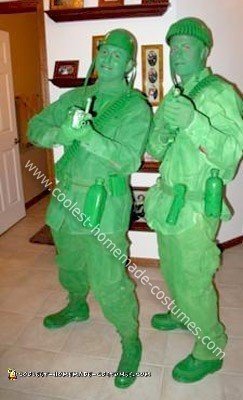 I love going all out for Halloween and usually start thinking of a future costume the day after Halloween. The idea of the Green Plastic Army Men came to me after I saw a clip on Youtube of visitors at Disney Land near the Toy Story display. They actually had guys all dressed in green, … Read more 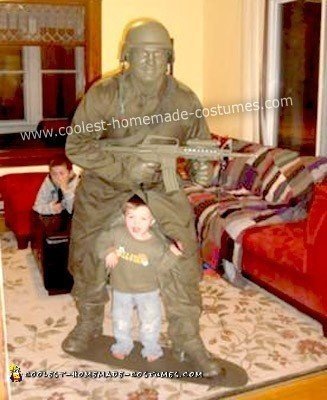 I put this Homemade Plastic Army Man Costume together using ideas from your site; I particularly loved the costume of the plastic army man and thought I could do it as well or better. It took about ten hours to paint my clothing, boots, helmet, gun and accessories and get the right color. I used … Read more 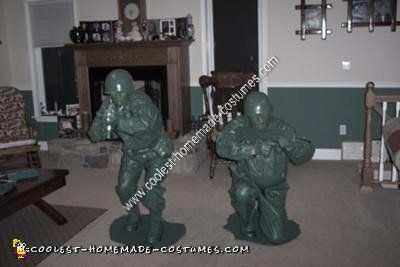 Our Green Plastic Soldier Costumes, “myself and my husband” were made out of real military clothes. My boots were my son’s worn out army boots and my husband’s were a pair of his own work boots. We used plastic hand grenades and attached them with Velcro. Our guns were my son’s old Airsoft rifles. The … Read more 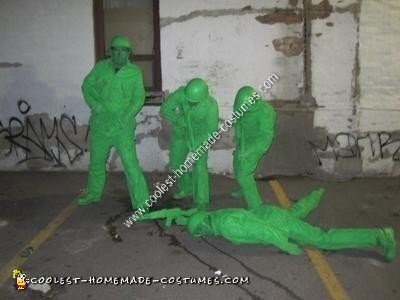 Our homemade plastic army men group Halloween costume idea was inspired by a 3D kids movie that was recently released which includes animated plastic army men. We loved the little guys so much we had to figure out a way to be them. We purchased simple military jackets($10), pants ($25) and helmets ($30) from the … Read more 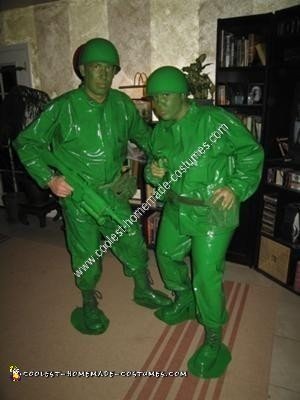 My husband and I are always looking for creative Halloween costume ideas. Last year we decided to be Green Army Men! The idea was easy but making the costumes took some time. We started out with military style clothing dyed with RIT dye. This idea didn’t get the look we were going for (we wanted … Read more 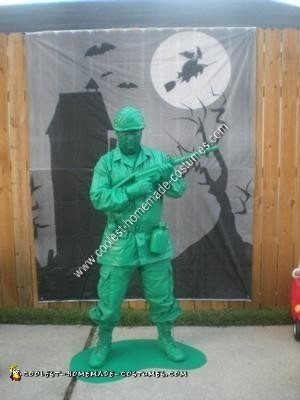 I started this homemade green army man Halloween costume idea by going to the army surplus store. I found a pair of used boots $5.00, belt $5.00 and a canteen $2.50. I found a pair of cargo pants and a BDU shirt $3.00 a piece. I didn’t want to spend a lot of money on … Read more 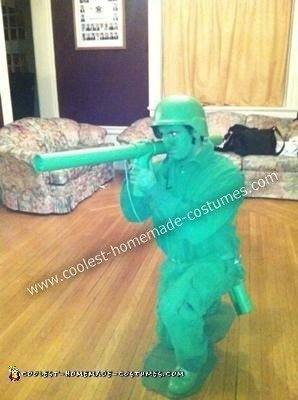 This was my favorite costume I have made to date. I hate using other people’s ideas but once I saw this I knew I had to try it out for myself. Everything is spray painted using Rustoleum spray paint. The color was Satin leafy green. I wanted to use a gloss spray to look more … Read more 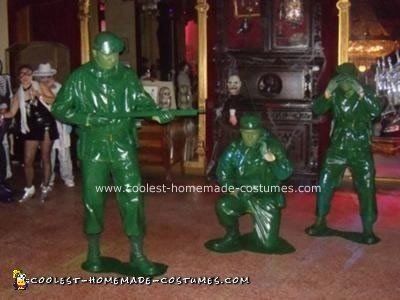 We decided we wanted to do a creative costume, and try to make it as realistic as possible. We decided to go with the Homemade Green Plastic Army Men Costumes. Although a few others have done this costume in the past, we felt we could take it to another level. We knew we needed to … Read more 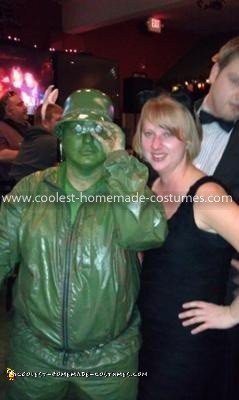 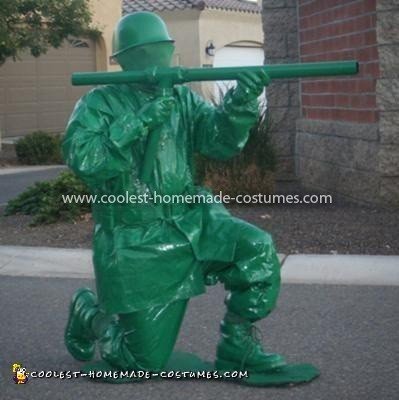 For this Toy Plastic Soldier Costume – pants and jacket were bought from a thrift store. I chose a raincoat and pants which had a slick material. I bought the utility belt, riffle, canteen, and walkie talkie from the dollar store. I used a pair of old work boots for my shoes. I had to … Read more 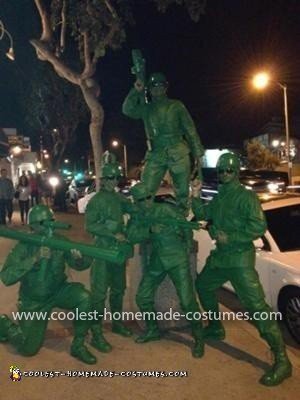 One of my favorite Disney movies is Toy Story and I wanted to come up with a great group costume, so instead of the traditional characters of Woody, Jessie, and the gang, I decided we should be the Bucket O Soldiers – 5 green toy soldiers. We bought used Army fatigues, belts, and boots from … Read more