I have 5 close girlfriends and every year we have the hardest time coming up with our group costumes! Being that we are all in college, we thought “what better costume than to dress up as our beer of choice…Coors Light!!” We bought cheap dresses at Forever 21 and Duct Taped each other into them … Read more 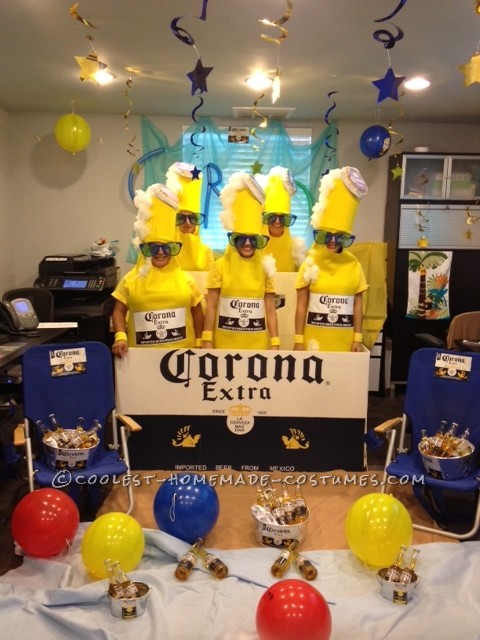 Corona 6 pack costumes was originated from an idea we saw on Pinterest but with Bud Light logo. We used a lot of yellow felt and man it was hot in those things . We used poster boards for the box and we cut everything out by hand for the letters of the box . We … Read more 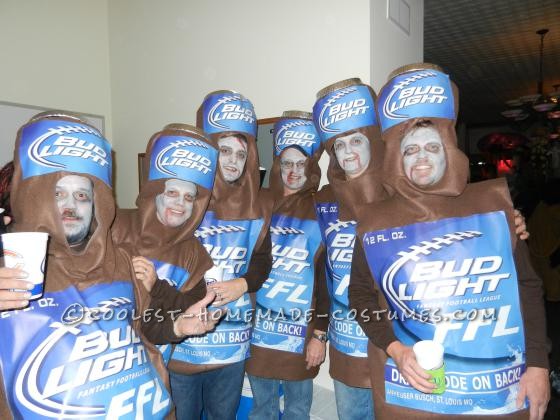 What better fitting than a six pack costume for a bunch of Bud Light beer lovers. A group of friends were attending the Nightmare on Chicago Street, Elgin, Illinois party 2012 and they just all happen to be big Bud Light beer drinkers. We decided the Six Pack group Halloween costume would be most fitting … Read more 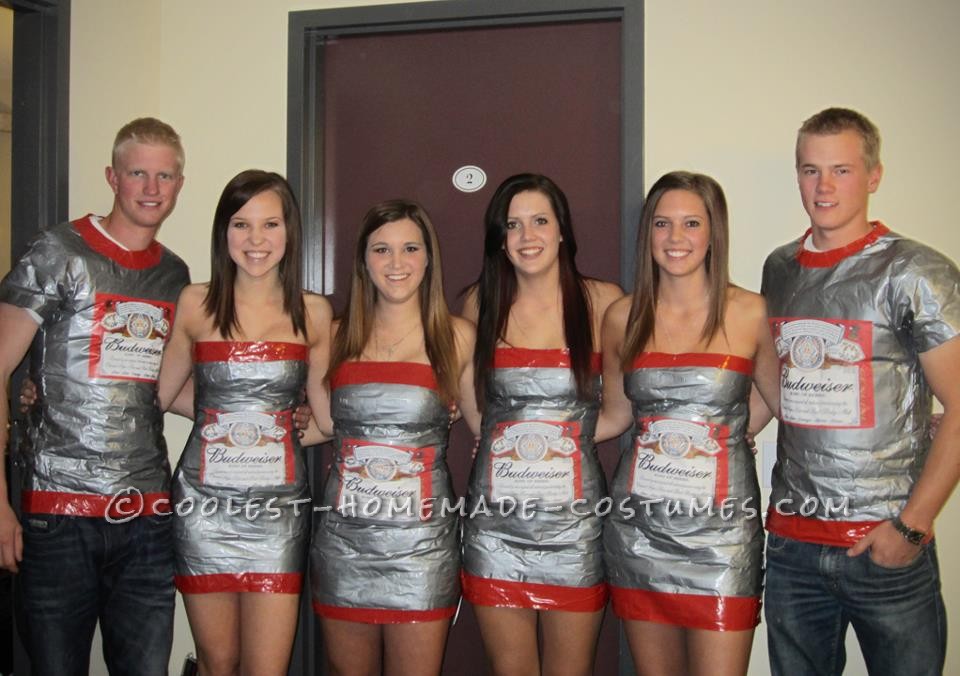 This last-minute Six Pack group costume was a lot of fun to make. Took a couple hours too, just went to the Dollar store and got tape and black garbage bags. It took a lot more tape than we thought so make sure you get lots. The logo was just found on the internet and … Read more 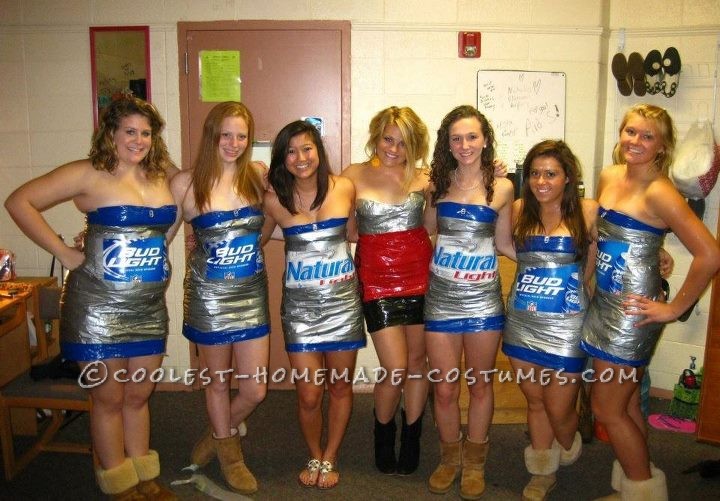 We made this 6-Pack and a Solo-Cup Group Costume with 3 items; lots of Duct tape, a trash bag, and the cardboard box from a 36 pack of beer.  You definitely need to use a lot of team work.  This picture is from my Freshman Year of college.  Half of the girls from the “6-pack” I hardly knew.  … Read more 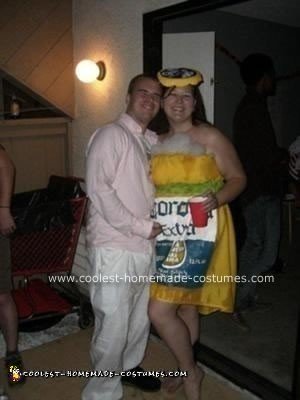 I wanted a unique costume this year that no one else would have. I had seen people dressed up as soda and beer before, but nothing that was cute enough to wear. I made a Homemade Corona Beer Bottle Halloween Costume. I had a Corona bottle in front of me, and I hand painted the … Read more 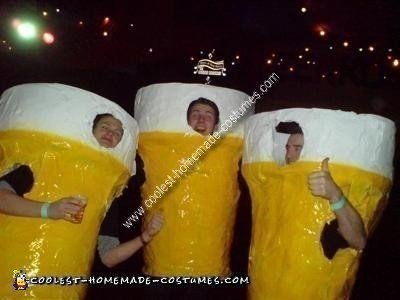 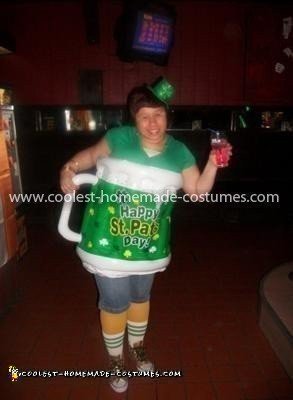 The beer mug is a blow up cooler. I cut the bottom of the cooler and put it on, then blew it up and dressed to match. Cheap, fun n easy, costs approx $5 at iparty for the cooler. 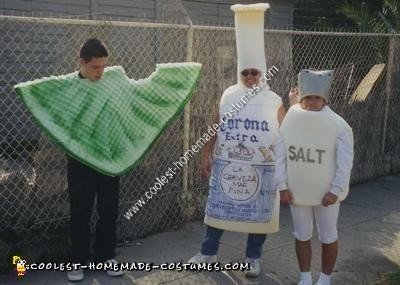 This homemade Corona Bottle with Salt and Lime Group Halloween costume was an awesome idea. It only started with the bottle, but when I had leftover material I came up with my lime and salt shaker. All was made with foam used for couch cushions. I have to say my thumb did hurt after I … Read more 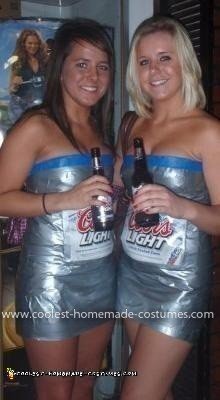 Our Homemade Coors Light Costumes were made of simply duct tape!! We first rapped ourselves in clear sticky kitchen wrap then put original silver duct tape over top with blue painter tap. Out lined it, was all topped off with the cover of a Coors Light 6 pack and tada, you are a Coors Light … Read more 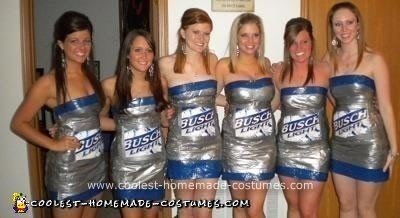 Every year we try and impress our college campus with an original and unexpected costume for Halloween. This year we got the idea to make ourselves a Homemade Six Pack of Busch Group Costume. Our entire costume cost under $10 a piece, a steal compared to those who spend over fifty for a crappy costume. … Read more 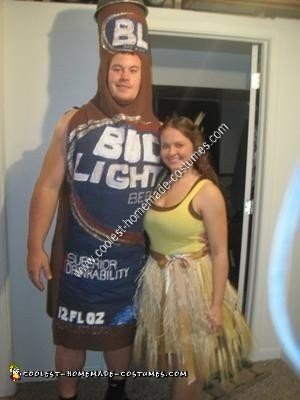 We have watched the Bud Light and Golden Wheat commercials on ESPN for a long long time. This year when we were discussing what costumes we were going to do we thought about it for a while. I like to make costumes rather than buy them and I was looking online at ideas for homemade … Read more