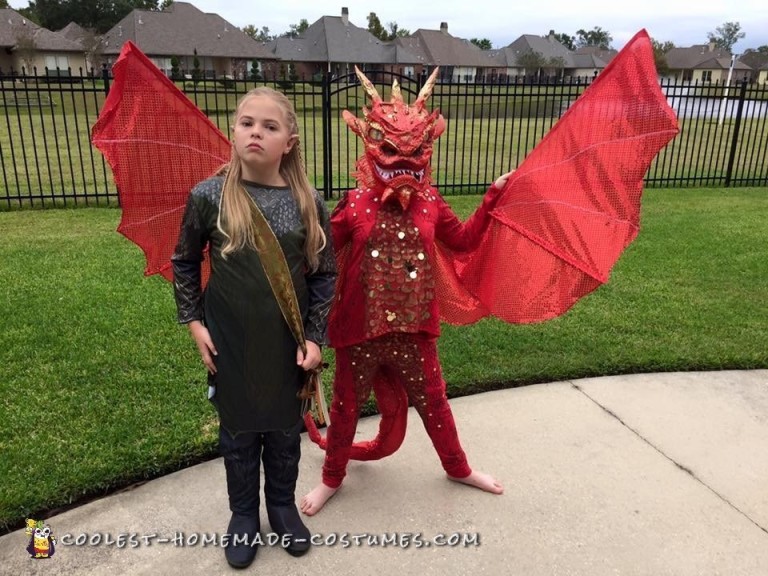 My nine-year-old daughter Dani loves dragons (and snakes, lizards, alligators, tarantulas, scorpions, sharks, etc.), and her favorite dragon is Smaug from The Hobbit (she claims he was just misunderstood). We read the book as a family a couple of years ago and she just loved it. She decided a while ago she was going to be … Read more 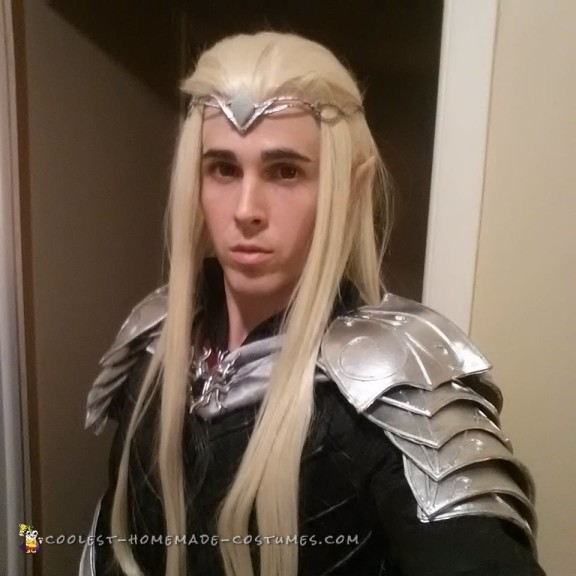 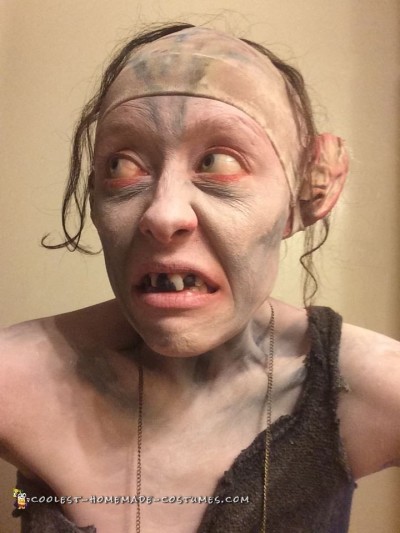 Inspiration to transform myself into Gollum came late one night when looking in the bathroom mirror after a long day… I thought it wouldn’t be that much of a stretch. ;) I made this costume the night before and day of my Halloween party, for a grand total of maybe $15 (not including the paint … Read more

As a fan of Lord of the Rings, I enjoy dressing as various characters to go trick-or-treating, as well as to go to the premieres of the movies. I’ve worn this particular costume a lot: two premieres and one Halloween. Basically, it’s just a white peasant blouse, a bustier from Wet Seal, a bustled skirt … Read more 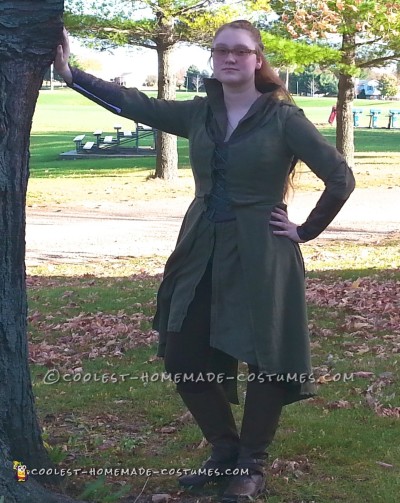 Let me start out by saying that I am a huge Lord of the Rings fan. After seeing Desolation of Smaug last year, I thought it would be fun to dress as Tauriel on Halloween. I got a lot of compliments on it (and second place in a costume contest), and it was nice and … Read more 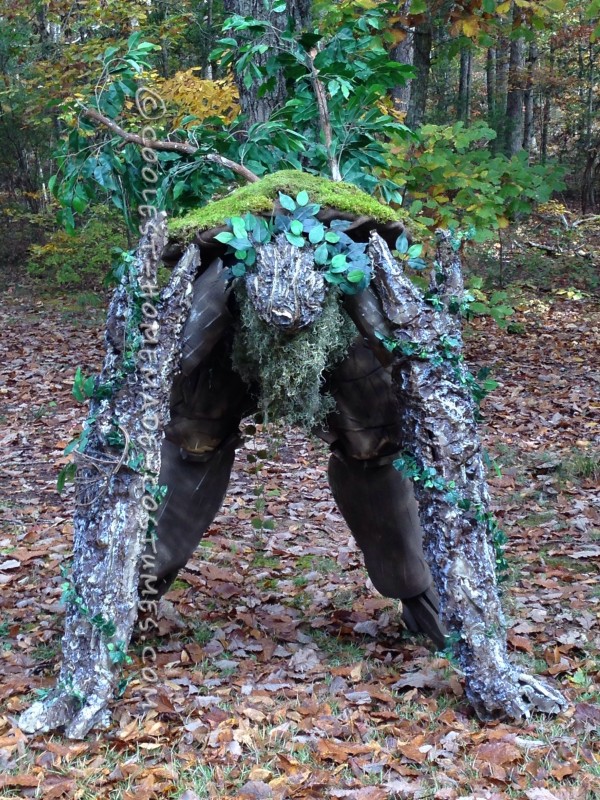 This is my costume from 2013 updated in 2014. It is an eight foot tall “tree ent or woodland spirit”. The inspiration came from Lord of the Rings, and also when I was young I went to a renaissance Festival and saw a giant tree man waking around. I thought it was the coolest thing … Read more 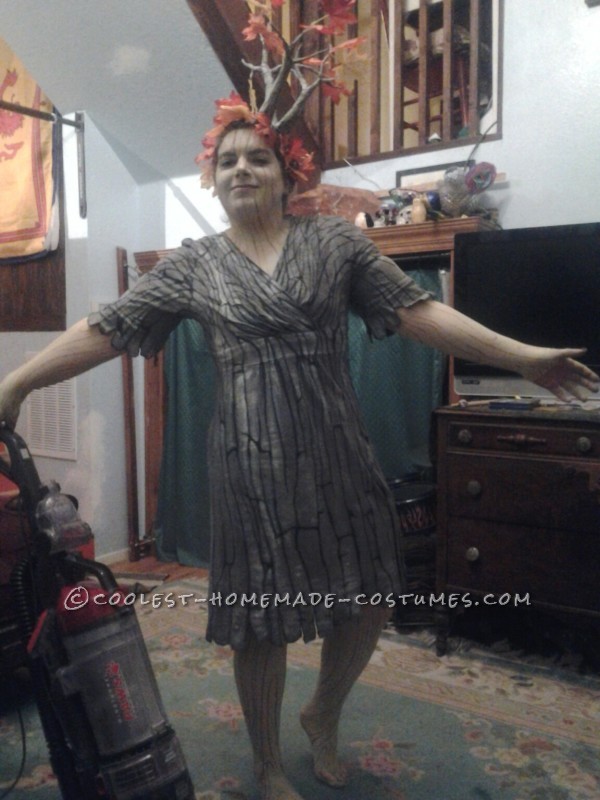 I’m blaming this one on too much Tolkien during my formative years, plus the fact that I happen to live in a national forest. After some intense psychological self debate (‘If I were a tree, what kind of tree would I be?’), I decided that I was feeling rather maple-ish. My three year old nephew … Read more 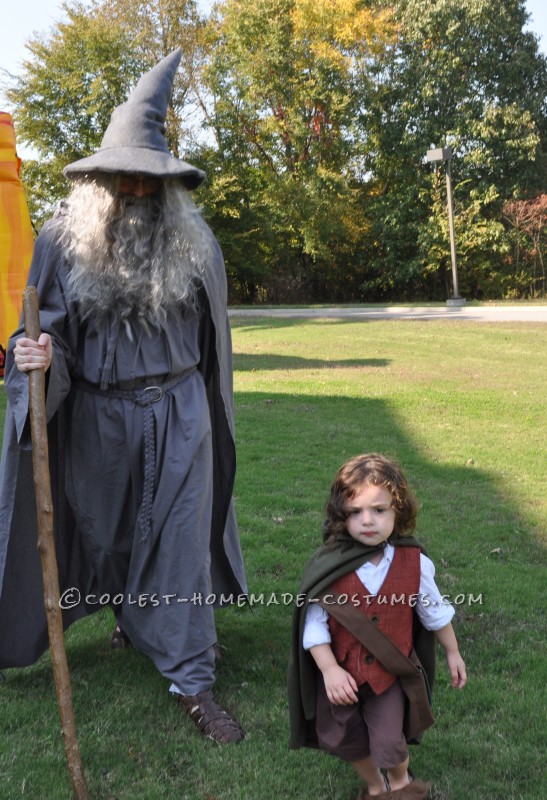 This year for Halloween I decided to make my daughter and husband Gandalf and Frodo.  My husband made me an Eye of Sauron costume at the last minute so I would match too but it’s not pictured. The hobbit costume was not too hard.  All the fabric came out of the remnant bins at 75% … Read more 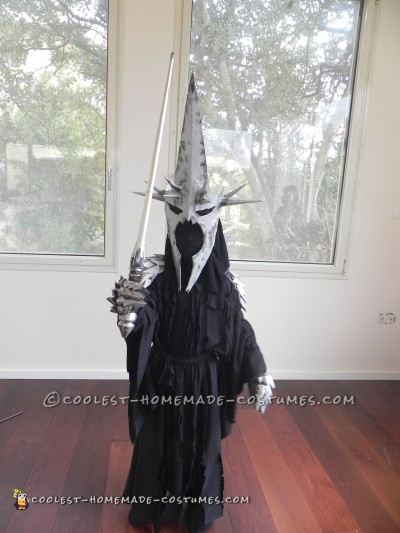 My boy wanted a Witch King costume from The Lord of the Rings so I did some research and found on the web a mask basic drawing and some videos for the cloak. The Mask I started the mask with a basic cardboard outline which I attached to a cardboard ring fitted to the boy’s … Read more 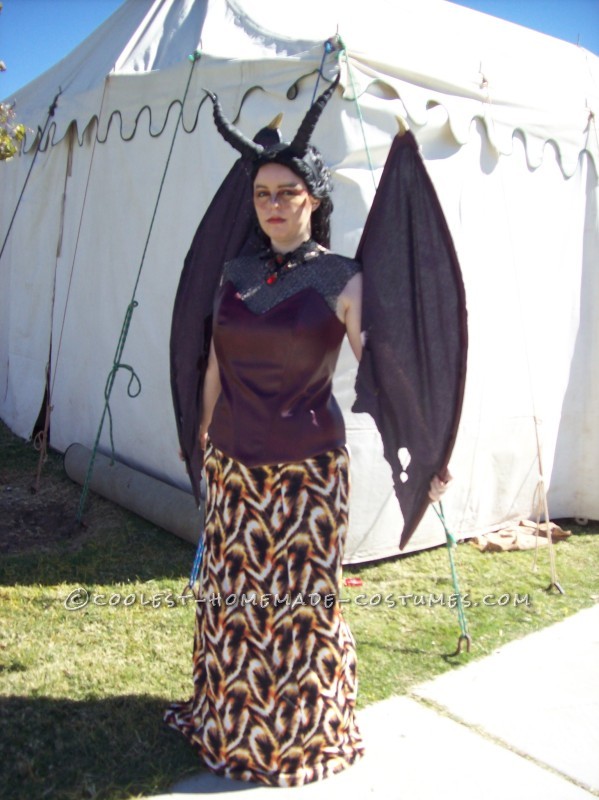 “There he lay, a vast red-golden dragon, fast asleep; a thrumming came from his jaws and nostrils, and wisps of smoke, but his fires were low in slumber. Beneath him, under all his limbs and his huge coiled tail, and about him on all sides stretching away across the unseen floors, lay countless piles of … Read more 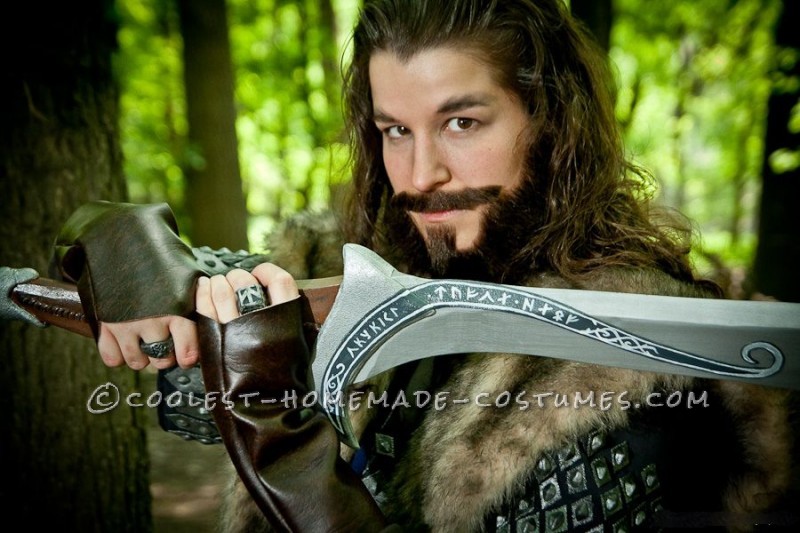 First off as the title says is Thorin a male or female, of course he’s a male but when worn by me it makes people take a double look every time. I made Thorin Oakenshield from the movie The Hobbit. A group of friends and I all got together to come up with our group … Read more 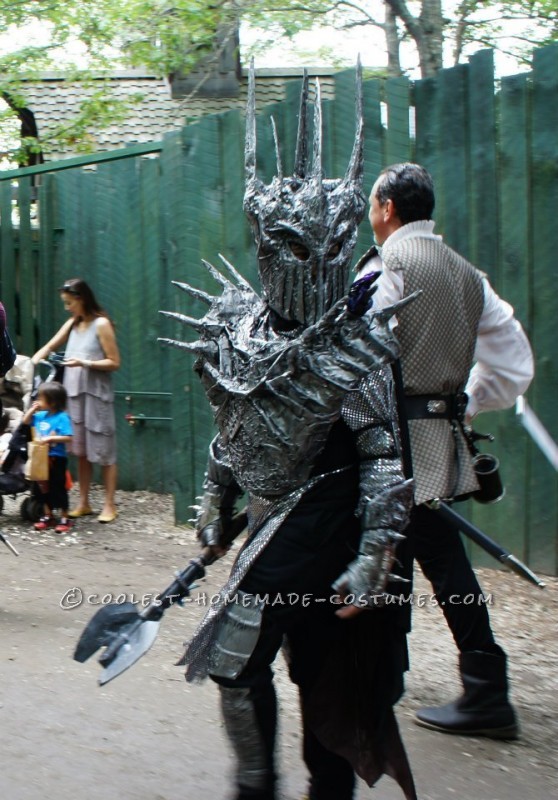 Our family loves to dress up in costumes and I am always up for a creative challenge. When my son asked to be Sauron, The Dark Lord, from The Lord of the Rings, I said “sure, no problem…what does he look like?” Then I saw the picture…oh, no. What had I agreed to?! I created … Read more 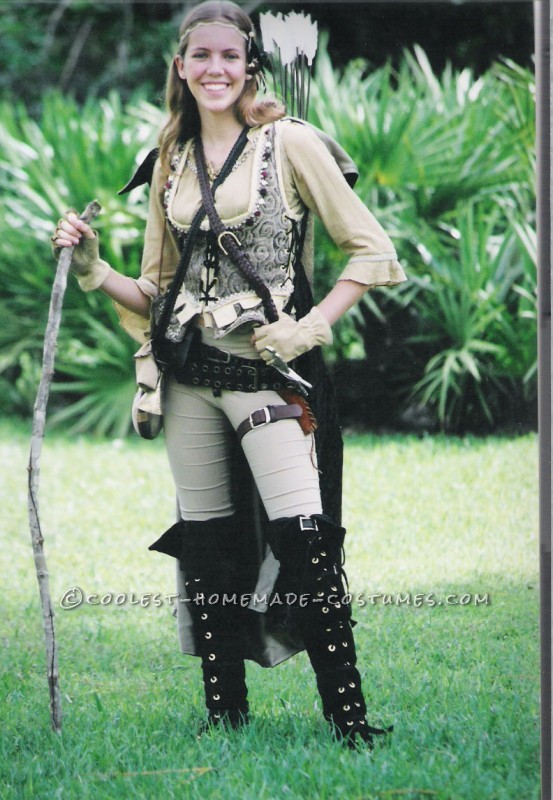 My daughter is a huge fan of Lord of the Rings. She designed this costume and asked me to make it for her. She wanted to look like she belonged in Middle Earth without exactly copying a costume from the movies. She wanted to be a strong female character and she wanted to carry a … Read more 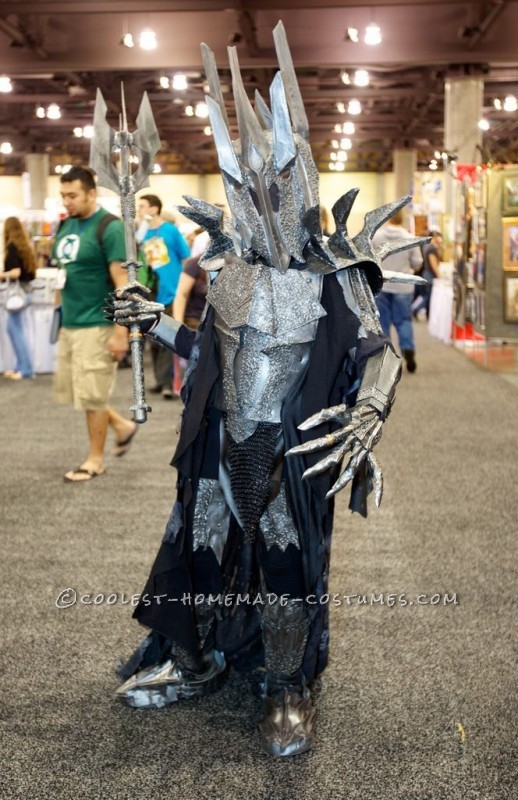 This is a Lord of the Rings Sauron costume I made for my son.  When he told me he wanted to be Sauron for Halloween, I wasn’t really sure how to pull this off.  I started with the “easy” parts. Cloak: I purchased a costume grade set of shoulder pads and attached layered/shredded black fabric. Hands: … Read more 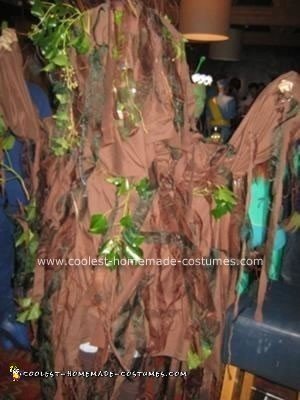 Each year at University there is a huge medics social event where older years can dress up fancy dress, the more creative the better. Last year our theme was movie characters and I chose a Treebeard The Ent from Lord of the Rings Costume I sewed a smock shaped top from two sheets of brown … Read more 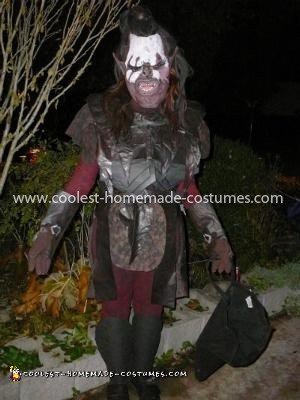 My 18 year old daughter loves Lord of the Rings and this year she wanted me to make her a costume from the movie. I was very surprised when she told me that she wanted to be Lurtz! I have been using plumbing pipe insulation (will refer to it as foam) for several years to … Read more

My grandmother left me a basement full of fabric and notions so had this great costume idea which was nearly free to me. It is white cotton over-laid with white lace. The only thing I bought was the gold sequin brooch. The belt is white grosgrain ribbon with white lace over the top (spray adhesive) … Read more

I made this from mint green material purchased for $2.88 a yard, $1.00/yard lace, an eBay-found crown which I re-strung to better fit Arwen’s crown, some dimensional fabric paints and a small bag of plastic rhinestones. The dress is a simple A-line dress with a short train and large sleeves. The upper sleeves and collar … Read more

We loved the “Lord of the Rings” Movies so I decided on this great costume idea for Halloween. We were Aragorn Arwen and Samwise. I bought a pattern and made a dress like Arwen with material from Wal-Mart at $1/yd. I put a rope belt around it and had sheer cream colored sleeves. I made … Read more