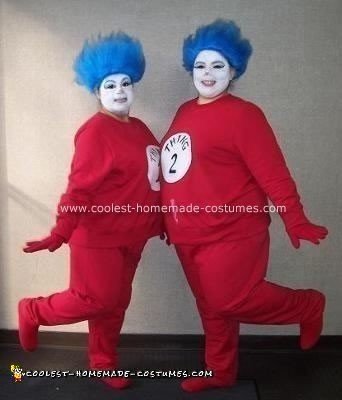 My best friend and I wanted to be something funny for the costume party at work. We’re always goofing around and making people laugh, so it had to be something good. It also had to be kid friendly because we’re schoolbus drivers. I had been reading The Cat in the Hat to my kids and … Read more 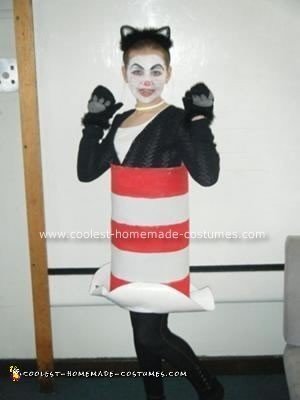 For this Cat in the Hat homemade costume I used thin foam off a roll, the sort you can use for packing (donated) to make the hat. I drew out the stripes then used acrylic paint, and used white glue (I needed some staples to secure it as it takes days for the glue to … Read more 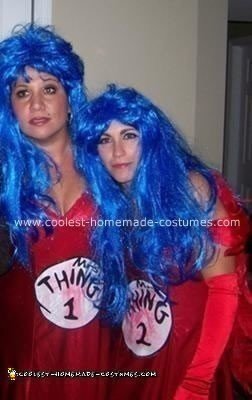 A dear friend and I went to a house party dressed at a rendition of Dr. Suess’s Thing 1 & Thing 2, we were “Mrs” Thing 1 & Mrs. Thing 2. Here is our version of our Homemade Mrs. Thing 1 and Mrs. Thing 2 Costumes. 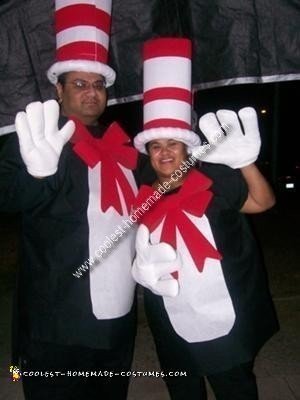 We were invited to a Halloween party and my husband and I thought of a homemade Cat in the Hat costume idea in Halloween 2008. Since we’re plus size it was best to make ourselves. I went to Walmart and bought the black felt material for the body of the cat. Since they had x-mas … Read more 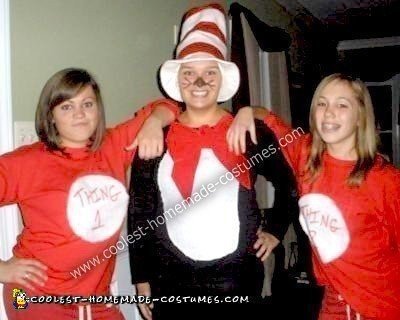 Well, we all decided to do something original for Halloween. Since the three of us don’t like buying costumes, we all made them. While deciding on an idea, we searched the web and found some great ideas. We decided to be the Cat in the Hat, Thing 1 and Thing 2. While trick-or-treating, everyone commented … Read more 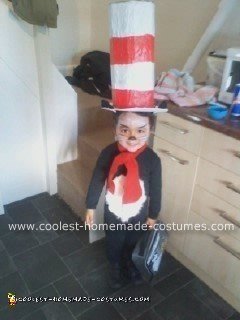 I made this homemade Cat in the Hat kids costume for my 4 year old’s world book day. The suit itself was just a large baby-grow dyed black, with fake fur sewed to the middle, a leg off a pair of tights for his tail, the hat was purely made from cardboard – then I … Read more 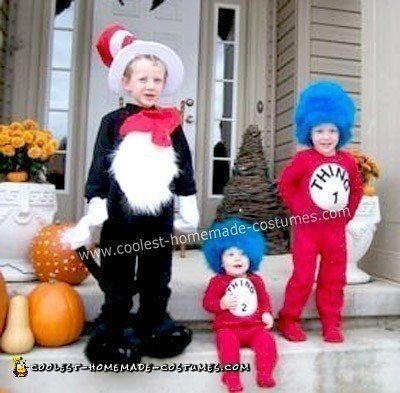 Our four year old was going to be The Cat In The Hat for Halloween and very much wanted his two brothers (ages two and 8 months) to be Thing 1 & Thing 2. I did not like any of the costumes available in stores (and none would fit the baby) so I found this … Read more 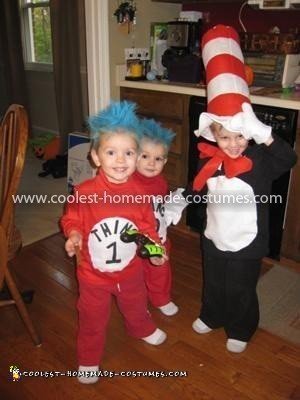 These are my babies ages three, two and one enjoying being dressed up on Halloween. They enjoy watching The Cat in the Hat Knows A Lot About that on TV. So I thought this was a perfect costume having the 3 boys. They are just as crazy as the Cat, Thing 1 and Thing 2. … Read more