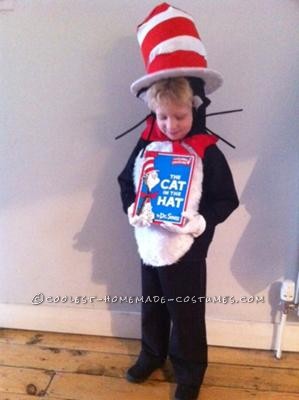 Cat in the Hat Goes to School

My son chose to dress up in a Cat in the Hat costume to celebrate World book day at school. Little did we know that the very same day (March 2nd) was the birthday of Dr Seuss!

Cat in the Hat Materials

I started by buying a black hooded top from eBay. This was the base for the whole costume. I bought some white and black fake fur and cut to shape for ears, tummy, and tail. Then I stitched these into place on the costume base. In addition, I used black pipe cleaners for his whiskers and stitched these on as well.

The hat was the major work! I used stripes of red and white poly cotton. I ironed these on to interfacing material in order to join them and add strength and stiffness to the hat.

Then, I cut a round rim out of cardboard measured against my son’s head. Next, I covered this in white felt using PVA glue.

After that, I used wonder webbing to fix the striped material into a tube. This was for the main part of the hat. Once that was done, it was then filled with wadding at the top. I made sure to leave space for his head to fit in it. I cut a circle of red felt and stitched this to seal the top of the hat.

The tall part of the hat was fixed to the rim with PVA glue and stitched for extra strength.

I ordered children’s white cotton gloves from amazon for only a few pounds, and he wore his black school plimsolls.

Cat in the Hat Costume Success

The costume was complete! And it survived a full day at school as a record of its durability!

Mom, Daughter and Son Cat in the Hat Family Costumes