Transform yourself into Bumblebee and watch how jaws drop when Robots – Transform! Whether you are young or old, You’ll also find loads of homemade costume ideas and DIY Halloween costume inspiration. 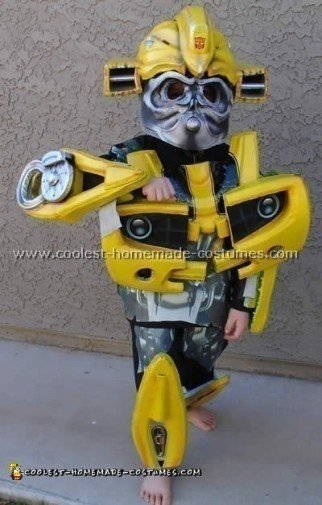 For this Bumblebee Costume we used minimal materials. The following were materials we purchased that can be found at Wal-Mart. Two foam camping bed rolls, black sweats and bike helmet. The following tools were necessary to complete the project: hot knife from a craft store, low temp hot glue gun (or one with adjustable temperature). The following materials were useful but not necessary: -Polyurethane Coating (Modge Podge would work similarly), iron on heat and press material.

We traced the child that would wear the Halloween costume onto a piece of butcher paper. Then I used that to scale the pieces again. (We actually had access to a large printer so we printed this out but initially we traced him onto the butcher paper). We simplified the detailed pieces from the original character and tried to keep the pieces that have heavy emphasis. Each piece was cut and hot glued in place. the knife makes it easy to trim corners off which gives everything a pretty rounded appearance. Be sure to use a low temp hot glue gun. It will hold the material but the high temp just melts it all away.

Once you have all the pieces cut and glued into place add flanges to the arm and leg guards so they can wrap around the legs and arms. These can then be tied with string or ribbon. We used Velcro. The ‘shiny’ parts that need to appear glossy were coated with a polyurethane coating. We used a pretty tough industrial coating we had laying around. But several coats of a thinner (but flexible!) coating should work just as well or better.

Then the Halloween costume is spray painted, yes spray painted! Surprisingly it didn’t eat the foam! Details can be added in with a small paintbrush or we used our airbrush. Then a sharpie or felt tip pen is great for adding detail in the face. The foam can be glued directly to the helmet and you can even blend it pretty well to match some of the curves on the helmet.

Bumblebee Costume Created by Brando B. from San Francisco, CA

The idea for this Bumblebee Costume started as a huge fan of the Transformers series and a bigger fan of well done on-screen special effects. This character is one to admire as well as a challenge to duplicate. The entire costume is hand cut from cardboard. It was broken down to six main pieces, the front torso, back torso, left forearm, right forearm, left leg and finally the right leg. 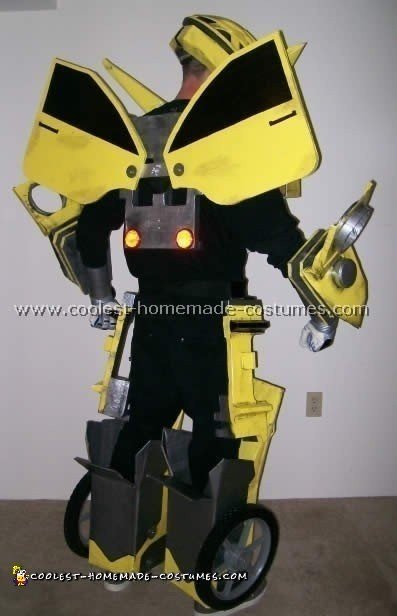 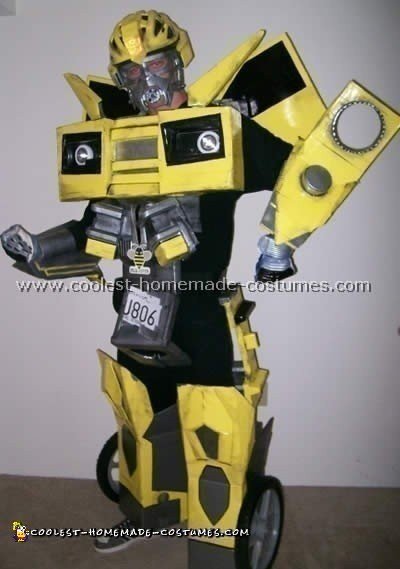 Once the cardboard was cut and assembled to my liking every inch had to be covered in duct tape. This provides a lightweight but durable ‘skin’ and also gives the surface something to paint onto. Once each piece was cut, assembled and taped, it was time to assemble each piece using luggage replacement straps.

The tires are lawn mower tires bolted in to a simple wooden skeleton under the foot pieces. The costume was then painted and detailed with war wounds and dirt. The headlights do function turning on and off at the touch. They are battery powered closet lights found at any drug store. That is about it to make this Halloween costume.