Skip to content
Home » Spooky, Gory, Dark & Scary Costumes » Frozen Head in Fridge Costumes » The Boy Who Wanted To Be A Real Refrigerator 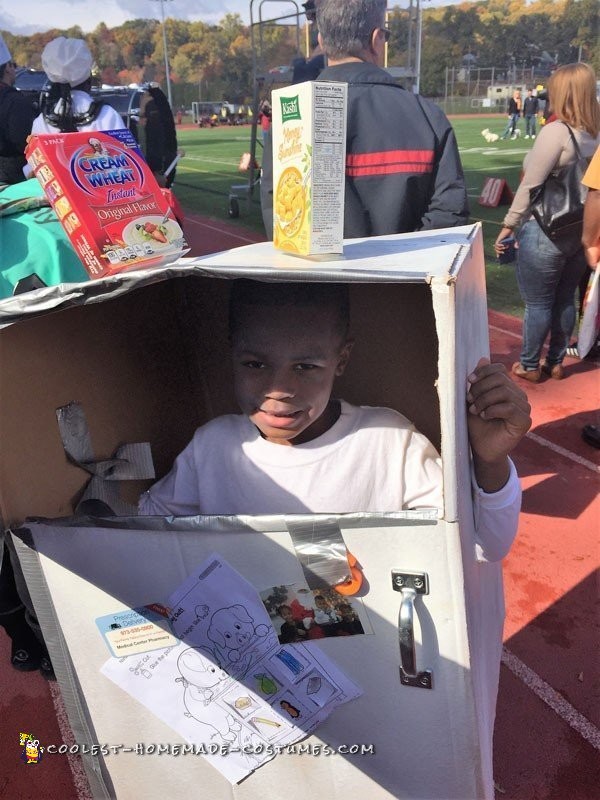 Before going back to work I made costumes for my kids at Halloween.

Thing 1 and Thing 2: 2 M&M’s, Washer and Dryer and the A Lion’s Den with my son in a lion costume watching a homemade TV. Fast forward one more kid. Two layoffs, no health insurance and depleted savings no more home-made costumes, it was time for me to go back to work.

I worked at a gym for $10.00 an hour full-time with health benefits, cleaned a yoga studio  and worked as an after care supervisor at my children’s school all in one day. Six month later, I accepted a job in my field with an hour commute each way.

On October 26, 2015, at approximately 9:30pm  I got home from work after picking up my son up from my mother ‘s house and decided that this was the year that I would make a costume. Did I still have that winning and creative spirit despite working 10 hours days and driving 60 miles per day between work commute and pick-ups?

I “gently” asked my husband to stop watching the football game and go pick up a box from Walmart. After 10 minutes of arguing he leaves the house only to return with the wrong type of box.

You see, I wanted to reinvent the wheel, I was going to make my six year old son be a washing machine. However, there were only two little problems: the box was not square it was rectangular and I could not make a rectangular washer or dryer so I went back online processed some information and decided what, how, when and where I would turn this rectangular box into a refrigerator and freezer. So, I left for Walmart at 11pm to pick-up white spray paint, silver electrical tape, hinges and door knobs.

I came home and started my project for my son. I went outside to the backyard in the dark with my two sons shining a pocket flashlight on me while I spray painted the brown box white. I ran out of spray paint.

I went to work the next day and on my lunch hour I picked up crazy glue, another can of spray paint and more handles.

I got home at 10:00pm and sprayed the box again. I let it dry overnight.

The next morning before work, I cut of two holes for arms, cut out the top front for the freezer, put on the silver electrical tape for the trim and put the handles on, then I proceeded to glue magnets, kid’s artwork and a family photo. On the top with Velcro, I placed a mini-cereal box and mini-cream of week box on top. It was done. Now all I had to do was convince my six-year old son that he should walk around town with a box on his head with blue face paint.

The moment of truth – Sunday, October 25th, the day of the Halloween Parade and Contest my son was pleasant but somewhat reluctant at first. He put on the refrigerator and proudly marched around the track twice while the judges decided our fate.

All the moms looked at me and said good job. I smiled but did not feel that the judges were paying attention.

After the marching band and parade ended, I took the refrigerator back to the car to pack up and leave. But not being a bad sport, I gathered around a table with the other contestants to hear who had won the costume contest by age category finally they got to the 5 to 7 age category and they called out Contestant #3. It was me, I mean my son, we had won.

I sent him to the front of the crowd and he picked up his envelope. The prize was one movie ticket . I thought to myself, wow, that will work out great with our family of six. They wanted to take a group photo of the winners so I ran back to the car to retrieve the refrigerator, but by the time I got back the picture was already snapped.

The night of Halloween. I checked out our local paper and saw that there was a costume contest from 6-9 in another county. I pleaded with my husband to take us. He reluctantly agreed. We arrived at the contest at 6:15pm, registered and let the judging begin.

Once my son put on the box, he was transformed to a real refrigerator. All we had to do was wait from 6:15 to 8:30 on the high school football field.

The judges made it to the DJ booth to announce the winners from 3rd place to 1st place based on age categories from 100 years old to 6 years old.  the refrigerator won best costume. I was so excited.

When we got home, my son said, “Mom, I want you to have my trophy because you deserve it for making my costume.” I cried and hugged him so tightly as I placed the trophy carefully on the dresser and made sure that I left space for next year!!