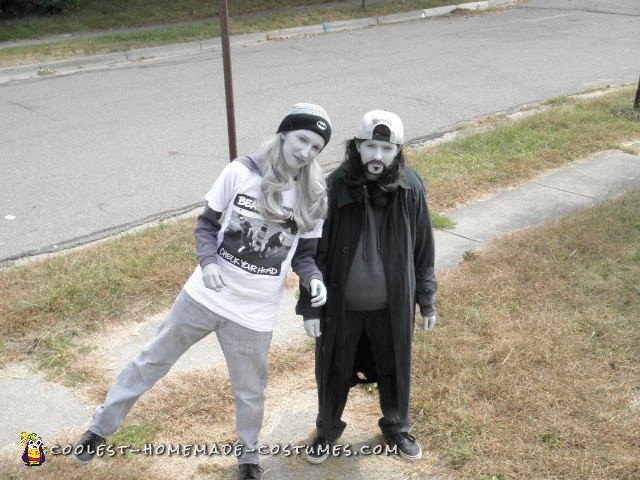 I was bugging my brother to dress up as Jay and Silent Bob for a while now and he finally agreed. I was Jay, he was Silent Bob. I just thought it would be really fun. Maybe because the characters always seem to be having so much fun. Whenever people dress up as Jay and Silent Bob they seem to always go as their “Jay and Silent Bob Strikes Back” version. But I hate that yellow jacket he wears in that movie with a passion. I did not want  to wear one like it. So we were brainstorming ideas of which version we should go when my brother says “Well if you hate the yellow so much, how about we go void of color? We should do the black and white versions from Clerks.” And thus, a brilliant costume idea was born.

Honestly, these costumes were pretty simple. We mostly used thrift store items for these costumes. Some of the stuff, like the Beastie Boys shirt and Batman beanie, we already had. The wigs and Batman snapback were bought on Ebay. And to go gray we used Kryolan aquacolor in 32B and then we used Ben Nye grey for our lips.

Some people said it looked like we stepped right out of a black and white movie. At first we were nervous about our costumes and didn’t think we’d be recognizable but a ton of people recognized us and totally dug our costumes. I literally lost count of how many people took our picture. Apparently, Jay and Silent Bob are still very much in. 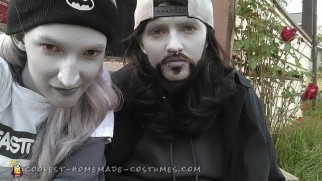 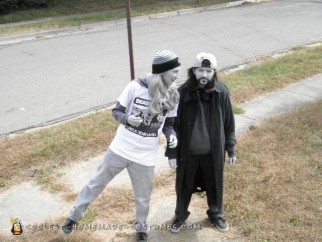 Sideshow Bob and Crazy Cat Lady from the Simpsons