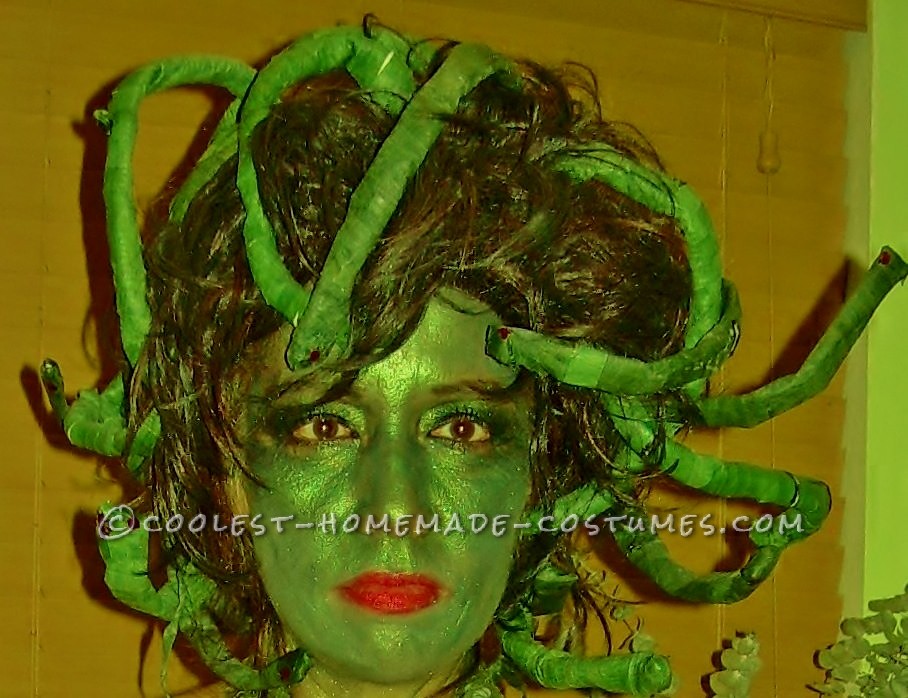 I love dressing up for Halloween, but the one thing I always wanted to be was MEDUSA!  But I could never figure out how on earth to do it.   The most challenging part was her snake hair.

Rubber snakes were too heavy to use, plus costly.  Store bought Medusa snake hair looked cheap and fake.  I thought and I thought until finally it hit me – I had some pipe cleaners at home and also some green floral tape.  I took a bunch of pipe cleaners to make them as thick as a snake’s body and wrapped them up in the green floral tape.  It was the perfect icky green snake color!!!!  And I could shape them to curve every which way!  I stuck them into an old wig that I had ( you can use a cheap Halloween wig) and secured them inside the wig.  The pipe cleaners were not too heavy.  I painted red eyes on the snakes.  The effect was eerie!  Finally, I used a pearlized green eyeshadow I had at home to paint my face and neck.  Put some black shadow around my eyes.  Bright red lipstick and VOILA!  The hardest part of my costume was done and I didn’t have to buy a thing!  I had a long flowy dress that I covered with some green cheesecloth Halloween material and I was done!  When I arrived at the party, people could not believe it!  They didn’t recognize me and I heard compliments all night and won top prize!  I fulfilled my dreams of being Medusa!