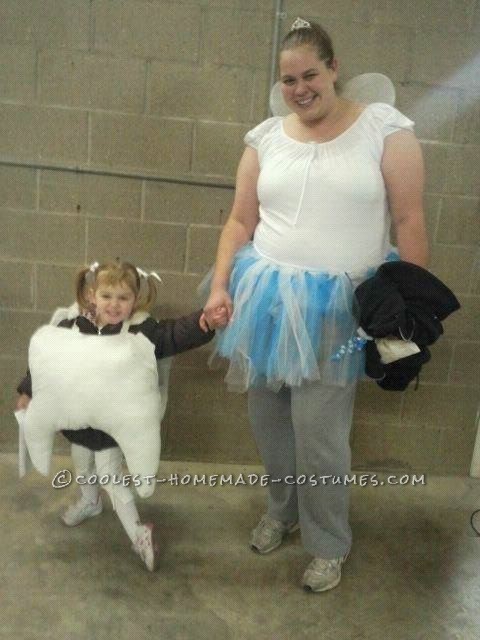 My oldest daughter recently lost her two front teeth which inspired this costume couple. I couldn’t get the oldest daughter to be the tooth because we had already made her costume, and there was no changing her mind. It seemed simple enough to make, and I used extra craft stuff I had laying around my house to make our outfits.

For the tooth, I took a big white sheet, cut out a tooth shape through all four layers, and sewed them into two separate tooth “pillows”  (you can also use a hot glue gun or fabric glue if you aren’t one that likes to sew). I stuffed them (making sure to fill the entire shape), and glued some elastic on each side and as shoulder straps. Voila! A tooth! Complete the outfit with a white shirts and white leggings, and of course put your hair in cute little pigtails with white ribbons.

The tooth fairy was just as easy. I made a tulle tutu (using a long piece of ribbon and tying strips of tulle to it). Using the extra tulle, I covered a sturdy straw for my wand. The only item I bought was my wings ($3.50 at the Dollar Store). Throw on a white shirt and white leggings (all I had was grey sweatpants because I couldn’t find white anywhere in town) with a pretty little tiara and there you have it! A tooth fairy!

The best part of these costumes, I spent $3.50 for both by using items I had in my craft boxes and laying around the house! We got compliments everywhere we went! This even won first place in a local costume contest, earning my little one some delicious goodies!

Finally, I thought I would share my thought on DIY costumes….if your hands aren’t covered in hot glue gun burns by then end of it, you’re doing something wrong! LOL. I have several battle scars from this year BUT my kids looked amazing and so unique! It has been a tradition for 6 years now that we make all of our costumes, and I refuse to spend major money in the process. It makes for a lot of fun and creativity!