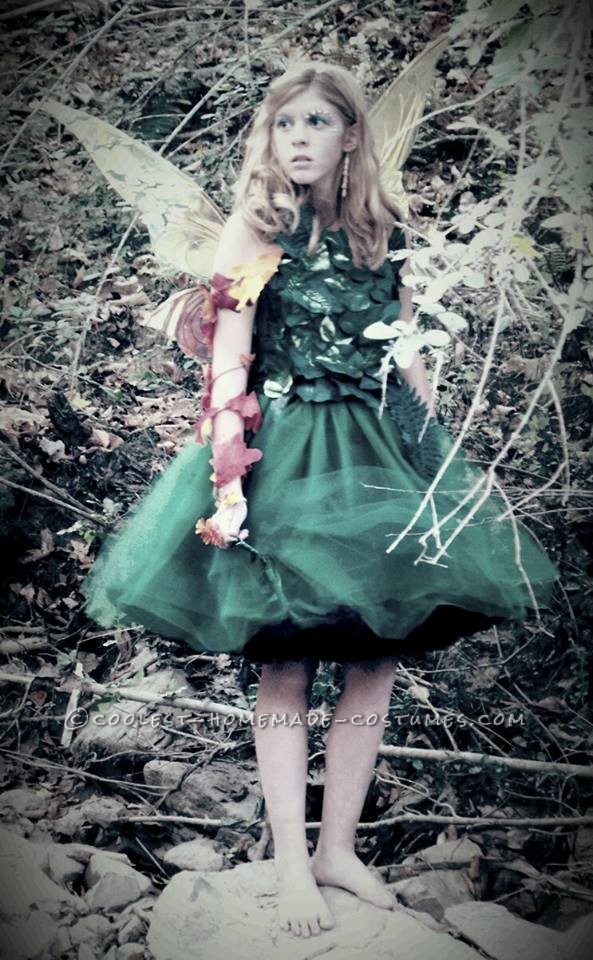 I consider myself a crafty person, but have never made my daughter’s Halloween costume. She is 12 now, and I feel that this could be her last “kid” Halloween. I wanted to make her a costume that would make her feel beautiful, to where she would stand out from the rest and “make an entrance” everywhere she goes. I wanted this to be the best Halloween ever, and one that she would remember forever.

Last year, I had bought her a set of fairy wings and decided to make a costume around them. They sit best tucked in a corset, so through Pinterest, I found an idea that would work. I bought a corset (from an adult store, which I felt so dirty in saying “Can you help me, I need a corset for my 12 year old daughter! LOL I tried to explain my idea with it being for a costume! It’s like the more I talked, the weirder it got! lol) I hot glued all different colored and sized leaves and fern to the corset, which have held up nicely so far ;) My mother and grandmother helped make the skirt which is dark and light green tulle. (My cousin did loan us her petti coat to make it poofy) The vines were made from a wire covered in a brown material to hold its place. I hot glued flowers, leaves and butterflies to the vine. The vine was attached to the top of the corset, and looped at the end to make a “ring” for her finger. I also cut and glued leaves to the back so it would appear the leaves went all the way around. For the local pageant, she also wore a vine down her left leg, but did not want to wear it for pictures because it was aggravating. Her make-up was simple with green eye shadow and silver gems glued on with body glue. I curled her hair and clipped it to the side with a butterfly on the top. Her shoes were old sandals that I hot glued big sun flowers on the front.

Some of these photos were hard to get. I say that because apparently, my daughter has not spent as much time as I have walking bare foot in creeks! We both knew the water was going to be cold, so she was prepared for that. But that first step into the creek took forever! lol I had to take off my socks and shoes, roll up my pant legs and walk with her across the creek, which you can see, is only about 2-3 inches deep and about 3 ½ feet wide! You could see every rock to step on, and the water didn’t even come up to my ankle! My daughter finally made it across and carefully walked to the rocks we wanted to get pictures on. One of my favorites was hard to get also. It is the one of her standing in the open field with the light in her hands. She had two mirrors to reflect the sun off of so I could get the picture. She didn’t quite understand that just because she couldn’t see the light, didn’t mean I couldn’t. We finally got the right picture and moved on. It’s one of my favorites because it looks like she has something mystical in her hands. The sunset pictures were fun to shoot also. As the sun set, the lighting changed, and I got different hues out of her wings.

I believe I have accomplished my goal in making a costume she’ll always remember! She wore it in a local pageant and won best costume.

We went in the woods for a photo shoot which she loved! Here are some of my favorite photos from our little “adventure”. 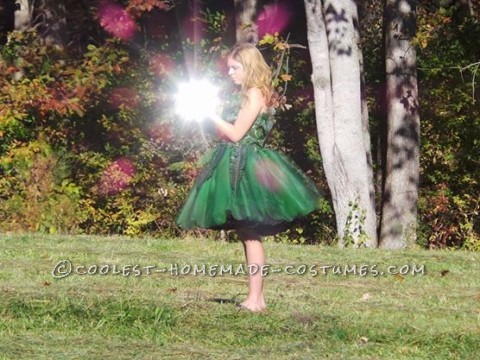 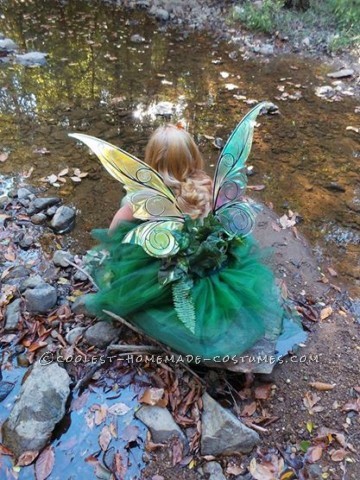 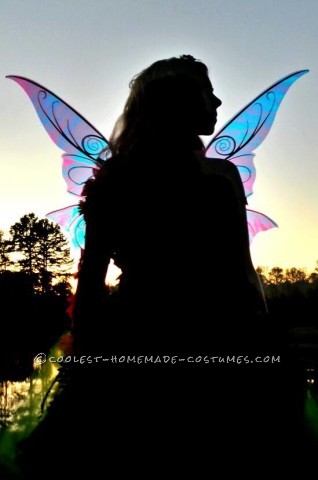